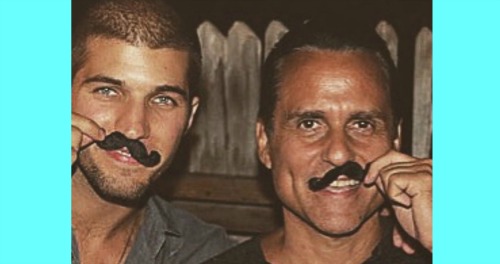 General Hospital (GH) spoilers reveal that viewers were happy to see Morgan Corinthos (Bryan Craig) pop up on the encore episode of GH this past Friday, April 17th. As you know if you were fortunate enough to catch the episode, Morgan appeared in Ava Jerome’s (Maura West) nightmare, appearing at her door looking a mess.

Well, in the wake of the episode, Bryan Craig posted some great photos on his Instagram feed of himself and Maurice Benard, who portrays Sonny Corinthos on the ABC soap. In the first photo, Bryan and Maurice appear as themselves and are holding up fake mustaches to their faces. They look happy and carefree together, clearly enjoying themselves.

The subsequent photos show stills of key scenes between Morgan and Sonny on the show, including scenes in which they’re at odds, and one key scene where they are holding each other at gunpoint. The final photo in the montage is of Morgan’s gravestone in the cemetery.

Bryan’s caption for the photo montage simply reads: “Sonny and Morgan.” Bryan’s fans have been responding steadily to the post and indicating how much they loved Morgan and Sonny together.

For example, one follower commented: “Bryan, you and Maurice had such intense chemistry!!! Loved the Morgan/Sonny relationship. Miss you so much.”

And another follower commented simply: “You guys did amazing work together.” Someone else said: “Miss you as Morgan so much! Such a great talent and character!!! Will always be one of my favorites.”

And someone even had a good storyline idea, saying: “Michael could use your brotherly love. Nelle is a problem for him and I bet you and Michael could come up with a way to get RID of that snake. Please come home.”

Of course, that fan was referring to the ongoing custody battle between Michael Corinthos (Chad Duell) and Nelle Benson Archer (Chloe Lanier), which is contentious and could result in Michael either losing custody of Wiley Quartermaine Corinthos (Erik and Theo Olson) or having to share custody with Nelle.

Other fans who responded to Bryan’s post pled to TPTB who might be reading to bring Morgan back from the dead. “Oh, u know they can give u a back story now what happened to u that u died but no body was found, and u could have lost ur memory and now getting it back little by little,” one person wrote. “C’mon GH bring this character back we love.”

Well, given that Bryan Craig has recently moved from Los Angeles to New York City, the likelihood that he’ll return as Morgan are slim at this point. But never say never, and of course another possibility is that the character could be recast. There have been several Morgan mentions on the show recently, so you never know!

At any rate, we enjoyed the great photos that Bryan posted, and we’re glad to see that he remembers his GH days fondly. Would you accept a recast for the role of Morgan Corinthos? Stick with the ABC soap and keep CDL at the ready for all the hot General Hospital news and updates. We’ll keep you up to date on all the sizzling soap news!