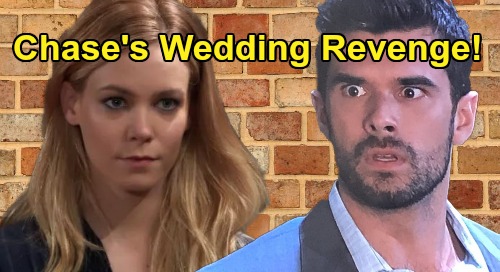 General Hospital (GH) spoilers tease that Willow Tait’s (Katelyn MacMullen) on the verge of making a life-changing decision. Nelle Benson Archer (Chloe Lanier) has pushed Willow to her limit when it comes to Wiley Quartermaine-Corinthos (Erik and Theo Olson). Willow feels like Nelle doesn’t care about Wiley at all, so she’s desperate for a way to stop Nelle from scoring custody.

Michael Corinthos (Chad Duell) suggested that if there was some magic bullet, he’d take advantage of it. Of course, GH fans know there’s indeed a solution that would help Michael in court.

As Diane Miller (Carolyn Henessy) pointed out, Michael could boost his chances of winning if he marries the perfect woman and shows he can offer a better mother for Wiley.

Sasha Gilmore (Sofia Mattsson) already suggested Willow as Michael’s bride and could soon suggest it again. Sasha may not even need to since Willow’s obviously spinning out. Willow can’t stand the thought of Nelle doing any kind of damage to this sweet little boy – the boy Willow thought was her own son thanks to Nelle’s baby swap plot.

On April 9, Willow will declare that just being protective isn’t enough. Willow will feel like she has to do something, so this is all setting up Willow and Michael’s inevitable wedding.

It’s safe to say Chase will have an angry meltdown – at least initially. Chase will undoubtedly beg Willow not to do this. The madly-in-love detective will want some other way to handle Nelle, but Willow will think they’re out of options. If they want to make sure Wiley stays out of Nelle’s hands, a “Millow” marriage is their best shot at it.

Chase respects Willow and may be able to accept her choice in time, but that doesn’t mean he’ll agree with it. It’s easy to imagine Chase making a last-ditch effort to stop the wedding – simply because he loves Willow so much. Nevertheless, it’s that love that should ultimately allow Chase to watch Willow marry Michael instead.

Chase already hated Nelle’s guts, but this should really push him over the edge. Nelle nearly cost Chase his career once upon a time and now she’s costing him the woman he’s crazy about.

This may be a marriage of convenience, but Chase will undoubtedly fear Willow could actually fall for Michael as they bond over Wiley. There’s a good chance that fear will even come true!

General Hospital spoilers say Chase’s rage toward Nelle will surely grow stronger. It sounds like Chase will want revenge, so he may make it his priority to trip Nelle up and put her back behind bars. As other GH news emerges, we’ll deliver all the hottest updates.

Do you think vengeful Chase will go after Nelle? Will he rev up his takedown efforts after Michael and Willow’s wedding? Don’t forget to stop by CDL frequently for other General Hospital spoilers, updates and news.