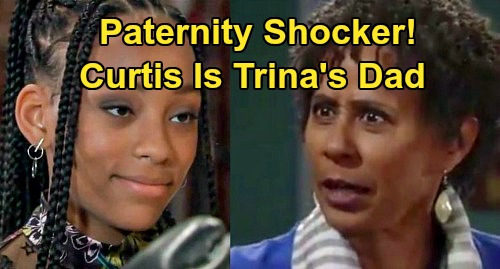 General Hospital (GH) spoilers reveal that it’s time to revisit an interesting theory. The evidence is mounting and it all suggests that Trina Robinson (Sydney Mikayla) may actually be Curtis Ashford’s (Donnell Turner) daughter, not Marcus Taggert’s (Real Andrews).

We can’t forget that Trina matched with a mysterious relative in town through an ancestry site. Stella Henry (Vernee Watson) also has a mystery connection left to unravel, so it seems these clues will ultimately come together. GH offered another one when it was revealed that Curtis and Portia Robinson (Brook Kerr) knew each other.

Curtis and Portia were certainly taken aback over their encounter at The Floating Rib. Trina had just finished blasting Curtis over Taggert’s death, so that’s another solid hint. It makes sense for General Hospital to play up Trina’s hatred for Curtis before ultimately revealing him as her biological father.

There was also that significant moment before Taggert passed out following the shootout drama. He pushed Curtis to take care of Trina before losing consciousness and being rushed to GH. It was almost like General Hospital was establishing that Curtis would take over fatherly duties – and now we may know why.

From the get-go, GH has laid the possible groundwork for this Trina and Curtis link. Even back when Curtis grilled Trina after the art auction, they had a nice father-daughter vibe about them.

It was the classic scenario of Trina giving Curtis sass and him being dad-ish with complaints about her phone. Not to mention Trina and Curtis are a lot alike in terms of their personalities!

Of course, if Curtis is indeed Trina’s bio dad, he doesn’t seem to know it. How will that shocker ultimately come out? It was kind of weird for Curtis to randomly be donating blood at GH before the wake. It’s possible that blood will come into play somehow as confirmation. Weird stuff often means something on soaps, but we’ll see!

Regardless, Portia seemed a bit unnerved by this Curtis sighting. That might be because she kept Trina a secret from Curtis and hid her daughter’s true paternity. Although Portia loved Taggert and part of her always will, she was adamant that he always chose his career over his family. However, that probably wasn’t something Portia could predict years ago.

Portia may have cheated on Taggert, who was busy with work all the time. She might’ve thought it was better to claim the child and try to keep that relationship intact. That plan obviously didn’t pan out, but this storyline presents some interesting options. We’ll give you updates as other news emerges on Trina and Curtis as a potential bio dad candidate.

Do you think Curtis is Trina’s biological father? Has Portia kept that a secret from Curtis and Trina all these years? If so, you can bet Trina isn’t going to be happy about it! She adored Taggert and holds Curtis responsible for his death, so they’re already off on the wrong foot.

It sounds like some great twists are brewing in Port Charles. As other GH news rolls in, don’t miss CDL’s General Hospital spoilers. There’ll be more updates to pass along as this hot plot gets hotter.