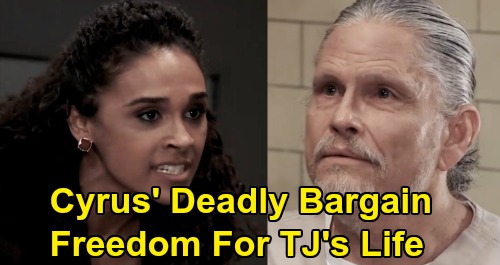 General Hospital (GH) spoilers tease that Jordan Ashford (Briana Nicole Henry) could find herself in a real predicament. She was all but ready to resign as Police Commissioner and confess to manufacturing the evidence that put Cyrus Renault (Jeff Kober) away all those years ago. But Curtis Ashford (Donnell Turner) talked her out of it, saying that she’d face prison herself for framing Cyrus.

Well, it seems that Cyrus may be about to really turn up the heat on Jordan. As GH viewers know, Cyrus has now killed three of her former DEA task force members, Marcus Taggert (Real Andrews) included. Jordan is the only one left standing, so that likely means that Cyrus will be coming for her with everything he’s got.

And given that Jordan’s son TJ Ashford (Tajh Bellow) now seems to be missing, that doesn’t bode well. Sure, TJ was upset about the fact that Molly Lansing-Davis (Haley Pullos) turned down his marriage proposal, but it’s really not like him to just disappear and then not show up for his medical rotation at GH. Something is likely awry here, and the horrible reality may be that Cyrus’ thugs have TJ and are holding him hostage somewhere.

Of course, Cyrus could just have TJ killed, in order to send a big message to Jordan. But what if he decides to go a different route? Even though Cyrus is running his operation from inside Pentonville, he’d probably really like to get out right about now. After all, he’d got Sonny Corinthos’ (Maurice Benard) territory to take over, and he’d probably like to be free after all these years.

What if Cyrus has TJ and he plans on using him as a bargaining chip? Cyrus could tell Jordan that he’d got her son, and that she’ll never see him alive again unless she lets him walk out of prison. That’s something that would totally be in Jordan’s ability to do – all she’d have to do is confess to manufacturing evidence, and Cyrus’ convictions would likely be overturned. He’d probably walk pretty quickly.

Of course, that would be a career-ending move for Jordan, and it would likely mean the she would serve jail time. There’s probably nothing more that Cyrus would like to see than for Jordan to be the one in prison while he walks the streets of Port Charles a free man. It would be a compete role-reversal, and it would put Jordan in a truly helpless position.

And if this is the way things are going to go down, then that means that TJ is in some serious danger. Of course, Jordan might not want to comply with Cyrus’ demands, for fear that he’ll go ahead and kill TJ anyway. The most likely scenario here would be that Jordan and the PCPD would do their best to find TJ, but that could prove to be difficult…unless she got some help from Sonny and Jason Morgan (Steve Burton).

Who knows, maybe TJ’s kidnapping will be the impetus for Jordan to finally agree to work with Sonny and Jason to take Cyrus down. She could tell Jason and Sonny what she did, then they could work behind the scenes to find TJ and get him to safety so that Jordan doesn’t have to confess her crimes and open that can of worms.

We’ll see what happens here, but we suspect that TJ is already being held somewhere, and that Cyrus is going to have some big demands for his release. Do you think Cyrus will manage to walk out of prison because of what Jordan and her team did in the past? Be sure to stick with GH and check back with CDL for your latest General Hospital spoilers and news.