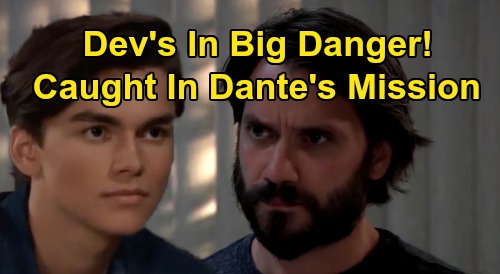 General Hospital (GH) spoilers tease that we should talk about the resurfacing of Dev Cerci aka “Dev Corbin” and the plans GH writers might have. Dev fell off the map for a while, but the show’s suddenly making an effort to include him again – and the timing is interesting.

After months of not committing to a love interest for Dev, now he’s admitted he likes Josslyn Jacks (Eden McCoy). After months of no real contact with Brando Corbin (Johnny Wactor), Dev’s going to his fake dad for advice. We’re seeing Dev become more established as a character.

Dev even slipped and mentioned growing up in Turkey during a chat with Joss, who reminded him he’s supposed to be from Bridgeport. So let’s think about this for a moment. We’re seeing a lot more of Dev, he’s getting some stronger bonds on canvas and GH is reminding us of his Turkey roots.

This seems like the prime setup for Dev to be involved in Dante Falconeri’s (Dominic Zamprogna) storyline. Dev risked his life to help Dante and Sonny Corinthos (Maurice Benard) escape in Turkey. That’s why Sonny was adamant about protecting Dev once he showed up in Port Charles.

However, Jason Morgan (Steve Burton) insisted Dev was going to be a problem. There were concerns since Dev had been in so much trouble with the authorities in Turkey and he scammed his way into the United States.

General Hospital laid the groundwork for Dev to indeed be the trouble Jason feared he’d be, but Dev mostly faded off the map instead.

Now that Dev’s becoming a key player in some ways, there’s a chance he’ll be a source of trouble after all – at least one way or another. Dante learned this mission involved someone who was possibly a family member – and Dev is a fake Corbin.

Of course, it’s tough to believe Dev would be working undercover as young as he is. It’s also difficult to believe it’d take someone like Dante to go after Dev, but stranger things have happened.

It may be more about who Dev used to be connected to than Dev himself. There may be more than meets the eye when it comes to this teen, who’s always been quite tied to Dante’s story.

Dev was believed to be a burglar when he first broke in Dante’s place and kicked off his stint in PC. GH may keep the Dev and Dante drama going strong if Dante’s mission is tied to him. Even if it isn’t, Dev might get hurt.

Dr. Kirk (Christopher Cousins) fears unintended targets could be harmed due to Dante’s shaky mental state. It’s easy to imagine Dev getting caught in the crossfire and fighting for his life in the hospital.

That might lead Brando to strengthen his connection to Dev and start thinking of him like a true son. Likewise, Josslyn would probably forget all about her crush on Cameron Webber (William Lipton)!

Dev’s hospital crisis might lead Joss to realize it’s Dev she wants – much like Cam and Trina Robinson’s (Sydney Mikayla) ordeal brought them together.

Do you think Dev will get dragged into Dante danger? Will General Hospital keep up the theme of Dante and Dev’s linked stories? As other news rolls in, we’ll pass along updates.

GH fans won’t want to miss the twists and turns ahead. CDL’s your one-stop source for sizzling General Hospital spoilers, updates and news, so be sure to drop by regularly.