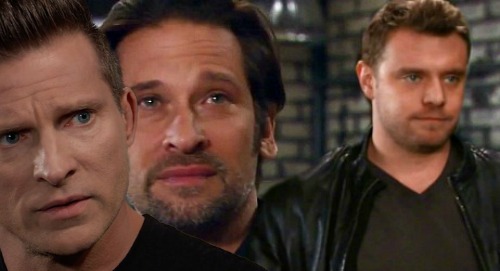 However, Franco’s been battling doubts about Liesl’s guilt. It’s just tough for Franco to believe that Liesl would try to kill such a close friend of hers. Will Franco’s suspicions rev up in the weeks ahead? Regardless, Franco will eventually learn the truth, which is that Liesl’s innocent – at least in this case!

Franco will inevitably learn about Peter’s guilt too, so he’s sure to unleash his wrath. Not only did Peter want Liesl to take the fall for his crimes, the crimes alone were horrifying. Franco could’ve been murdered and ripped away from the “Friz” family permanently if the hit Peter ordered had been successful.

Of course, there’s also Drew’s murder to consider, which brings us to those new developments we mentioned. Franco will realize Peter’s responsible for Drew’s demise. Drew actually became a pal to Franco in the end, so this news should leave Franco completely enraged. Peter’s the reason Drew’s gone forever…or is he?

It’s possible Peter’s keeping some Drew secrets as leverage – just in case things fall apart. Whether Peter’s willing to talk or not, Franco might discover some clue about Drew’s survival. Could this lead to reviving the search for Drew?

If so, Jason Morgan (Steve Burton) would probably want to get in on that. It’d be important for Scout Cain’s (Ella Ramacieri) sake as well as Sam McCall’s (Kelly Monaco).

Sam’s always going to care about Drew as her ex and the father of her child. If there’s a chance Scout’s dad is still out there, Franco and Jason would want to find him. Since GH left the door open for Drew’s comeback, they have a great opportunity here.

Billy Miller could reprise the role or General Hospital could even go for a recast. Either way, Drew’s return certainly can’t be ruled out at this point.

Do you think Drew is still alive? Will Franco and Jason set out to find Drew after Peter’s destruction? It might be a good way to bring closure to this storyline and keep Peter from looking so evil. It would undo a little of the damage if Peter didn’t murder Drew after all.