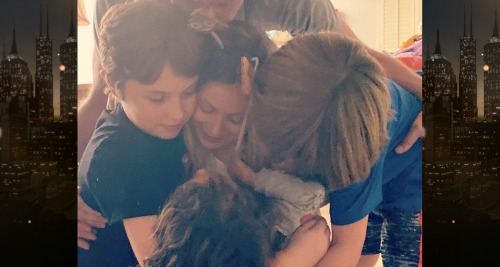 General Hospital (GH) spoilers reveal that Emme Rylan (Lulu Spencer) has posted a response to the news of her firing, which seemingly confirms she’s been forced to say goodbye to playing Lulu Spencer.

On Instagram, Rylan put up a picture of herself looking emotional as her family surrounded her for a group hug. The caption was equally heartbreaking, so let’s look at what she had to say.

“Some days are hard and you just need your whole family to give you a hug,” Rylan admitted.

If you follow Rylan on social media, you know this has already been a difficult year for her. Rylan lost her sister to cancer in July, so this job loss is yet another tough blow – especially since it feels like it’s coming out of nowhere. There’s a good chance Rylan was blindsided when she first found out.

Emme Rylan’s firing was a huge shock to the soap world and makes zero sense considering Dominic Zamprogna just returned as Dante Falconeri. Many fans were looking forward to a slow, heartfelt journey back together for Dante and Lulu, but General Hospital is cutting Rylan and writing Lulu out instead.

There’s always the possibility that Lulu will be killed off or presumed dead, though we’d hope GH writers have sense enough not to do that. There’s truly no need in Lulu dying when she could be brought back down the road.

It’s possible Lulu will leave Port Charles with Dustin Phillips (Mark Lawson) or perhaps take a job out of town. There are plenty of ways to explain Lulu’s departure without resorting to anything that’s hard to come back from.

Of course, anyone can return on a soap, so there’s no need to worry too much even if Lulu’s exit turns out to be a fatal one. It’s always a “never say never” situation when it comes to making a GH comeback. Still, it seems unnecessary when Lulu could just leave PC alive and well, but we’ll see how it goes.

Regardless, this is sad news for now – and General Hospital fans are still reeling. “This is not a happy day,” one viewer commented on Instagram. “Why in the world would they let you go?? Big mistake. We love you.”

“The version of LuLu you brought to life has been one of my favorite GH characters ever in the nearly 40 years I’ve been watching the show! Huge mistake letting you go!” another fan said.

It’s great that Rylan’s getting so much so support from her family, friends, costars and devoted fans. As other details emerge about Lulu’s exit story, we’ll bring you updates.

Some days are hard and you just need your whole family to give you a hug.