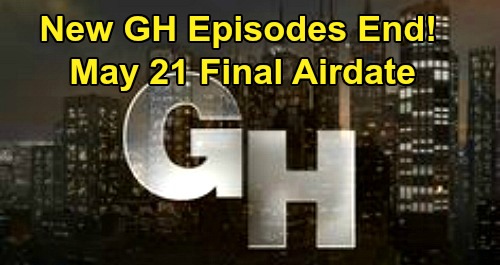 General Hospital (GH) spoilers tease that the ABC soap will officially run out of new episodes on Thursday, May 21. After one more Flashback Friday episode, GH will kick off a special trip down Nurses Ball memory lane! According to TVLine, the show will switch to Nurses Ball classics starting Monday, May 25. That plan will continue through Friday, June 12, so General Hospital fans are in for a treat.

Of course, most of us wish GH could keep airing new content, but that’s just not possible due to the studio shutdown. General Hospital was forced to suspend production back in March, so we’re lucky they were able to keep delivering new episodes as long as they have!

All that flashback padding helped along with those Friday encores, but we’re rapidly approaching the end of fresh material.

Thankfully, General Hospital has a rich history full of episodes they can re-air. Since the Nurses Ball is such a beloved event, it makes sense to revisit some amazing performances and the inevitable drama.

The Nurses Ball always features plenty of singing and dancing, but you can count on a showdown or two every year, too. It’ll be fun to look back and get some exciting blasts from the past.

There’s no news yet on what GH plans to air following the last Nurses Ball encore, but they should select some interesting themes. It might be fun to focus on fierce rivals or perhaps grand weddings. GH will find some way to keep filling that airtime until the cast and crew can get back in the studio.

This is all happening due to the COVID-19 aka coronavirus crisis, which brought things to a screeching halt. Some General Hospital cast members have suggested the show might get back up and running again by July or August, but there’s really no way to know for sure yet. It’s still a waiting game right now, but at least we’ll have some great Nurses Ball encores in the meantime!

As for what the future holds, what kind of themes would you like to see GH do? Are there special couples you want to see celebrated through classics? We’ll keep you posted as other updates come in. General Hospital spoilers say some fantastic stuff’s coming up before the new episodes run out, so stay tuned. CDL’s your hotspot for exciting General Hospital spoilers, updates and news posts.