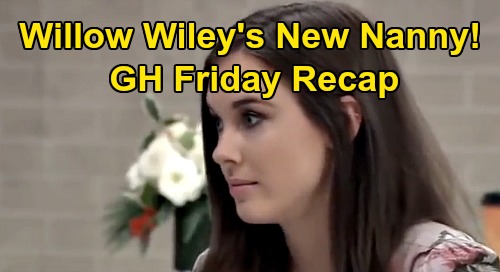 General Hospital (GH) spoilers recap for Friday, January 10, reveal that Elizabeth Baldwin (Rebecca Herbst) was stunned to see Nikolas Cassadine (Marcus Coloma) at GH. She couldn’t believe her eyes, and the two hugged happily. He informed her about his rescue, as well as his recent wedding to Ava Jerome (Maura West). Elizabeth chastised him for not contacting those who love him earlier, and when she mentioned Hayden Barnes (Rebecca Budig), he failed to mention that he was the reason she left.

Elsewhere in GH, Sasha Gilmore (Sofia Mattsson) caught up with Michael Corinthos (Chad Duell), who noted that he had been pouring through nanny resumes.

Since Michael didn’t like any of the candidates, he said he was thinking about stepping back a bit from ELQ and taking care of Wiley Cooper-Jones (Theo and Erik Olson) itself. Sasha liked the idea.

Meanwhile, Sonny Corinthos (Maurice Benard) pressed Julian Jerome (William deVry) for details about what he and Brad Cooper (Parry Shen) were talking about on the pier the other night. He warned Julian to think twice if he’s got something brewing, and Julian explained that he was just warning Brad about not falling apart.

Sonny then needled Julian about having a bad relationship with Lucas Jones (Ryan Carnes) and using Lucas’ coma in order to swoop in and make a move on Wiley.

Julian fired back that Sonny must have had an associate following Carly Corinthos (Laura Wright) that night on the pier. Sonny refused to discuss it and told Julian to stay away from anything Corinthos related.

Back at GH, a frazzled Brad talked with Willow Tait (Katelyn MacMullen) about his recent struggles. Michael then came along and explained his idea about taking care of Wiley. Brad balked and suggested that Willow take care of Wiley.

Julian walked just in time to hear that, and he opined that Michael should do it. But Brad persisted that Willow should be the person to care for Wiley, and Willow happily agreed. Neither Julian nor Michael were particularly thrilled with that decision.

In Jordan Ashford’s (Briana Nicole Henry) office, she questioned Jason Morgan (Steve Burton) about the Corinthos Coffee truck that was hijacked and burned on the side of the road.

Curtis relayed that Bob died of an opioid overdose, which didn’t ring true with Jordan – it just didn’t seem to fit Bob’s personality. Jordan wanted to see the police report, which Curtis had already forwarded to her. Later, Jordan called someone and asked them to drop what they’re doing and get to Port Charles asap.

Nina seemed mildly receptive until she saw the proposal, which included a mockup of a Crimson cover with Sasha’s face on the cover. Lucy proposed a deal, which Maxie thought was a good idea.

However, Nina wouldn’t go for it, saying that they needed another model to represent the brand. Lucy said that Sasha was an equity partner and she had to be the spokesperson. Nina promptly passed on the deal.

Maxie urged Nina to reconsider, but Nina wouldn’t budge. Sasha then entered and said that Nina’s attitude was just plain stupid, and she proceeded to make a strong pitch for a partnership.

Maxie then stepped in and negotiated some terms and suggested strategic changes for the cover. Nina seemed somewhat impressed by this, and she said to leave the proposal and she’d consider it.

Maxie stepped outside with Lucy, who gave Maxie her card and said that if she ever wanted a partnership of her own, to give her a call. Inside, Nina took out the half-heart necklace and looked at it wistfully.

Finally, in the Corinthos kitchen, Jason arrived and updated Sonny on his conversation with Jordan earlier. Turns out, they had Diane Miller (Carolyn Hennesy) give the driver of the hijacked truck a generous severance package and relocated him in Tennessee so he couldn’t blab to the police.

They discussed who might have targeted their truck and deduced that it might be someone who is trying to make a move on Sonny’s territory. Sonny noted that whoever is responsible is making a mistake.