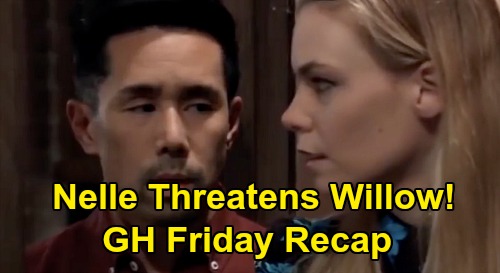 General Hospital (GH) spoilers recap for Friday, January 17, reveal that Jason Morgan (Steve Burton) and Michael Corinthos (Chad Duell) talked at the Metro Court about all the damage that Shiloh Archer (Coby Ryan McLaughlin) is still causing to them both, yet Michael didn’t think that Shiloh could do anything to Wiley Cooper-Jones (Theo and Erik Olson) at this point.

Later, Sasha Gilmore (Sofia Mattsson) arrived to see Michael, who wanted Sasha to move in with him in order to protect her from Nelle Benson Archer’s (Chloe Lanier) threat. He explained how dangerous Nelle was, but Sasha declined to move to the Quartermaine mansion for the time being. She thought that they had a great thing going and didn’t want to mess with it.

Next, Marcus Taggert (Real Andrews) showed up at Turning Woods to see Mike Corbin (Max Gail). Sonny Corinthos (Maurice Benard) then showed up and unhappily recognized Taggert. Jason arrived, amusing Taggert. Sonny got in Taggert’s face wondering why he was back, but Taggert gave some non-answer.

Meanwhile, Jason talked to Mike about their trip to Brooklyn, but Mike didn’t want to go because he couldn’t find Yvonne Godfrey (Janet Hubert). Jason managed to distract Mike with some music, and after Taggert swaggered off, Jason, Mike, and Sonny left for their trip.

Back at the Corinthos estate, Gladys Corbin (Mel Harris) was still hanging around, and she made both Josslyn Jacks (Eden McCoy) and Dev Cerci (Ashton Arbab) uncomfortable as she went on about how handsome Dev was. Both Dev and Josslyn flashed back to their kiss.

Later, Carly noticed that Josslyn didn’t seem to want to hang out with Dev and wondered if perhaps Dev had hit on her. Embarrassed, Josslyn revealed that she had kissed Dev but that he wasn’t into it. Carly tried to talk with Josslyn about moving on and how it’s ok to love Oscar Nero Quartermaine (Garren Stitt) but fall in love with someone else, but Josslyn didn’t want to talk about it.

Meanwhile, at Kelly’s, Camron Webber (William Lipton) and Trina Robinson (Sydney Mikayla) bantered about the winter formal and who they should each ask to go with them. The topic of Cameron’s feelings for Josslyn eventually came up, but Cameron insisted that he has no feelings.

Dev then came in, with Gladys tagging along, much to Dev’s chagrin. Soon, the teens made an excuse to leave and ditch Gladys, who was being clingy and annoying. Trina asked for Cameron’s phone and ended up texting a girl on his behalf, asking her to go to the winter formal. Cameron balked.

Next, in Jordan Ashford’s (Briana Nicole Henry) office, Harrison Chase (Josh Swickard) tried to update her about the Corinthos truck case, but Jordan was distracted by a news article about her old friend Bob Massicotte (Randy J. Goodwin). She warned Chase to stay away from Nelle and let the PCPD keep tabs on her. Chase said it would be tough, but he’d try.

At Brad Cooper’s (Parry Shen) place, he tried like crazy to get rid of Nelle, since Willow Tait (Katelyn MacMullen) was scheduled to come take care of Wiley. But Willow showed up, and she eventually came face-to-face with Nelle. Both ladies angrily shouted at Brad, asking why the other was there.

Nelle was particularly upset to learn that Willow was Wiley’s new nanny, and after Brad dismissed Willow for the day, Nelle blasted Brad and said that being Wiley’s nanny could be bad for Willow’s health. She then announced to Brad that she could take care of Wiley, and that he needed to get rid of Willow for good.

Upset from her run-in with Nelle and Brad, Willow met with Chase at the Metro Court and told him what had happened. Michael and Sasha then approached and wondered if everything was ok. Willow said that things were awful, and that Nelle was living with Brad, and that Wiley is no longer safe in that environment.