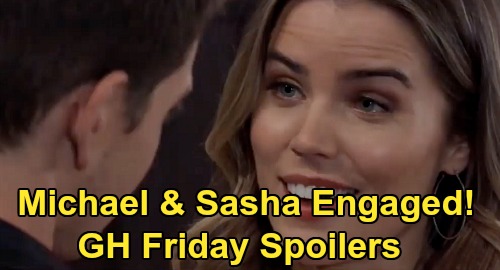 General Hospital (GH) spoilers for Friday, March 13, tease that Michael Corinthos (Chad Duell) and Sasha Gilmore (Sofia Mattsson) will continue their marriage discussion. They just reconvened and realized maybe they shut down the topic too quickly. Michael will talk about what’s most important here and that’s Wiley Corinthos (Erik and Theo Olson). He’ll wonder if Sasha could love Wiley, so she’ll admit she already does.

It looks like Michael and Sasha will decide they’re engaged, which means they’ll have a wedding to prepare for soon. Over with Willow Tait (Katelyn MacMullen), she’ll have her mom on her mind. Willow will speak with Harrison Chase (Josh Swickard) about Harmony Miller (Inga Cadranel), who’s been missing from all the baby swap aftermath so far.

Willow may plan to meet with Harmony and see what she has to say about all this. Chase will insist he hopes Harmony lives up to Willow’s expectations. Unfortunately, Willow will seem a bit uneasy. Her relationship with Harmony is complicated and may get even more complicated down the road. It seems likely Willow is really Nina Reeves (Cynthia Watros) long-lost daughter, so that bomb may drop eventually.

In the meantime, Britt Westbourne (Kelly Thiebaud) will make an admission to Julian Jerome (William deVry). She’ll confess that she knows Julian was helping Brad Cooper (Parry Shen), but she’ll probably promise that his secret is safe. Brad wants to give Lucas Jones (Ryan Carnes) a little something to hold on to. It would add to Lucas’ pain if he knew Julian was mixed up in this mess as well.

General Hospital spoilers say Britt will open up to Julian about feeling like an outsider. Julian also feels like a town pariah, so they’ll form an intriguing connection. That connection will lead them to the bedroom soon enough. GH fans can expect a sizzling hookup within the next couple episodes, so stay tuned.

At The Floating Rib, Sam McCall (Kelly Monaco) will talk to Damian Spinelli (Bradford Anderson) about Liesl Obrecht’s (Kathleen Gati) recent arrest. The news will derail Franco Baldwin’s (Roger Howarth) date night with Elizabeth Baldwin (Rebecca Herbst) since they’ll overhear nearby. Franco will reel when he learns Liesl’s in jail, but will he really believe Dr. O would try to kill him?

Hopefully, GH writers will let Franco have some common sense here. There’s a good chance Franco will side with Spinelli and believe Peter August (Wes Ramsey) must’ve framed Obrecht. In lockup, General Hospital spoilers say Liesl will get a visit from Nina. That’ll give Liesl an opportunity to rant about Anna Devane’s (Finola Hughes) devious son setting her up.

While Nina gets Liesl’s version of events, Curtis Ashford (Donnell Turner) will try to calm Jordan Ashford (Briana Nicole Henry) down. She just came home shaking and lashed out at Stella Henry (Vernee Watson), but that’s only because she’s terrified over T.J. Ashford’s (Tajh Bellow) predicament.

Curtis will tell Jordan that it’s over – presumably meaning her unsettling meeting with Cyrus Renault (Jeff Kober). Sadly, Jordan will have to confirm that’s not the case. This certainly won’t be over until T.J.’s home safe and sound. If Jordan wants to make that happen, she’ll have to fulfill all Cyrus’ demands.

As for Stella, she’ll grow increasingly concerned. Stella could tell something was seriously wrong the moment Jordan walked in. The longer T.J. ghosts his loved ones, the more Stella will worry about him, too. General Hospital spoilers say Stella may force Jordan and Curtis to fill her in sooner or later. She cares about T.J. and will want updates as the drama revs up.

It sounds like there’s plenty of excitement ahead in Port Charles. Don’t miss all CDL’s hot GH info. We’ll always have some great General Hospital spoilers, updates and news posts to check out.