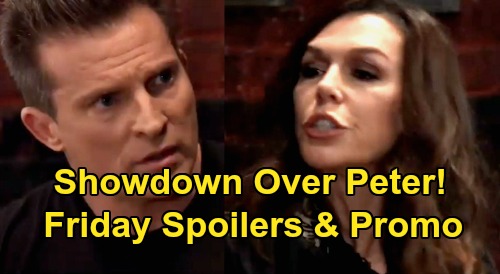 Peter will tell Spinelli about his upcoming marriage to Maxie and suggest there’s nothing Spin can do about it. Of course, Spinelli may counter that they’ll see about that!

Like Brando Corbin (Johnny Wactor) pointed out, it’d be better for Maxie to not talk to Spinelli than to not talk at all. Spinelli has to take the appropriate steps to protect Maxie, even if she’s furious. Maxie’s life may depend on it.

It’s no surprise that Maxie’s looking elsewhere for employment after the way she’s been treated, but Nina will still think this is a betrayal. General Hospital spoilers say Lucy Coe (Lynn Herring) will deliver an enticing proposal on Friday. There’s a good chance Lucy will lure Maxie to Crimson and leave Nina scrambling to fill her position.

Nelle Benson Archer (Chloe Lanier) will wind up rejoining the Crimson staff next week, but that’ll bring a whole new set of problems for Nina – namely, the reactions of Nelle’s enemies.

Until then, Willow Tait (Katelyn MacMullen) will learn an upsetting secret. Harrison Chase’s (Josh Swickard) admission could spark some “Chillow” tension, which could lead to bigger trouble than Chase imagined.

Willow will get the scoop on Chase and Sasha’s recent agreement. It wasn’t really that big of a deal since Sasha and Chase have their partners’ best interests at heart.

They basically agreed that Willow and Michael Corinthos (Chad Duell) were too close to this Wiley Quartermaine-Corinthos (Erik and Theo Olson) situation. Chase and Sasha intended to keep an eye on things and report back to each other.

Perhaps Chase will let this slip as he complains about Sasha’s latest suggestion. Since Sasha was so adamant about Michael marrying Willow, Sasha’s clearly not in the same headspace she was before.

Whatever the case, Willow won’t be happy that Chase was going behind her back and sharing private details with Sasha. Chase will have to explain and defend his actions, so we’ll see how that goes.

Other General Hospital spoilers say Carly Corinthos (Laura Wright) will offer Michael a stern warning. Carly will insist that Michael has to win custody by any means necessary.

This is mostly about protecting Wiley, but Carly would be lying if she said it wasn’t about Nelle, too. Carly hates Nelle with a passion, so there are many reasons why she’ll refuse to let Nelle win.

Sasha will be nearby as Carly gives Michael this warning, so the marriage suggestion may come up again. Although it’s be tricky and painful, Sasha seems convinced that a Michael and Willow wedding would be for the best.

However, Carly may think there are other tactics they can try first. Since Sasha’s a good girl who also knows how to be a bit bad, Carly will feel like she’s the perfect fit for her plot.

Next, Anna Devane (Finola Hughes) will have an important question for Jason Morgan (Steve Burton). General Hospital spoilers say Anna will remain frustrated by Jason’s view of Peter. As they discuss the matter, Anna will wonder what it’d take to convince Jason he was wrong.

Jason may not be sure how to answer that. All Jason knows is that he can see what Anna and Maxie can’t. The case against Liesl Obrecht (Kathleen Gati) makes zero sense, so Jason has every reason to still believe Peter’s guilty. No matter how Jason responds, there probably isn’t anything that could change his mind at this point.

Finally, Brook Lynn Quartermaine’s (Amanda Setton) faceoff with Lulu Spencer (Emme Rylan) will spiral out of control. Lulu ordered Champagne to celebrate Maxie’s raise, which didn’t end up panning out. Fortunately, Lulu will find another great use for that bottle when she gives Brook Lynn a bubbly shower.

Naturally, Brook Lynn will launch at attack of her own on Friday. In the latest preview video, Brook Lynn shouts, “You bitch!” before barreling into Lulu. General Hospital spoilers say things will most definitely get out of hand, so stay tuned. We’ll pass along updates as other GH news becomes available.

It sounds like some chaos is coming up thanks to Brook Lynn and Lulu’s fight. Whose side are you on? Stick with CDL for other scorching General Hospital spoilers, news and updates.