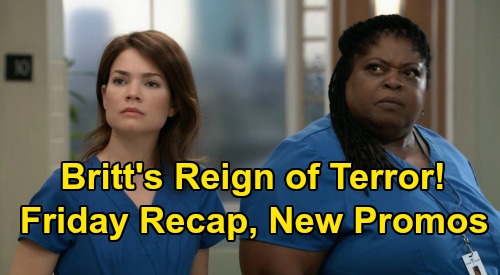 Sonny gently told Mike that they were all there for him and that he was not alone. Carly went off to call Michael Corinthos (Chad Duell), and Josslyn asked Sonny for some time alone with Mike so that she could say goodbye.

Josslyn talked to Mike, saying that she was thankful for the time she had with him and that she loved having a grandfather. Josslyn recalled a time that Mike thought she was his friend Mary, and Josslyn said that it made her think about her future in a different way. “When I picture milestones, you’re right there with me,” Josslyn said.

Josslyn then imagined Mike there with her as she prepared for homecoming, and she said that she’d go have a good time because that’s what he’d want her to do.

Finally, Josslyn imagined being a bit older and telling Mike that she was pregnant with her first child and that he’d be a grandfather again. Josslyn told Mike that he was a blessing to her, while out in the hallway, Carly comforted Sonny and they talked about how Mike and Josslyn had an incredible relationship.

Carly thought that all the memories they made with Mike were still with him. Sonny said that he couldn’t have done any of this without Carly.

At the Jerome Gallery, Ava Jerome Cassadine (Maura West) and Franco Baldwin (Roger Howarth) reeled from their kiss, then decided quickly that it had been a mistake.

Ava said that she missed that kind of closeness, but that she wasn’t about to cause problems with Franco and Elizabeth Baldwin (Rebecca Herbst). Through their conversation, Franco learned about the conditions of Ava and Nikolas Cassadine’s (Marcus Coloma) post-nup, and he urged Ava to reconsider her marriage.

In the park, Elizabeth told Nikolas that she couldn’t be kissing him, and Nikolas said that it seemed like Elizabeth was looking for a way out of her marriage. Elizabeth said that she was trying to save her relationship, not ruin it, and she apologized for the kiss.

Elizabeth learned about Nikolas’ post-nup with Ava, and she said that Ava would never hear about the kiss from her.

After Elizabeth took off, Franco approached Nikolas looking for Elizabeth. Nikolas lied and said that he hadn’t seen Elizabeth, and Franco said that he was supposed to meet her here. Soon, Franco took off to go find Elizabeth.

In another area of the park, Dev Corbin (Ashton Arbab) told Cameron Webber (William Lipton) that he wasn’t surprised that girls were into him. Dev advised Cameron to pick either Josslyn or Trina Robinson (Sydney Mikayla), since things were such a mess.

Cameron then called Dev “asexual,” which upset Dev. Cameron pressed for information on who Dev might be interested in, and Dev took off in a huff.

At the hospital, Trina visited with Portia Robinson (Brooke Kerr) briefly. Portia wondered about Trina going to the homecoming dance with her friends, and she asked if Trina would mind if Cameron ended up with Josslyn at the end of the night.

Later, Hamilton Finn (Michael Easton) and Epiphany Johnson (Sonya Eddy) materialized and the topic of the new chief of staff came up.

Soon, Britt Westbourne (Kelly Thiebaud) appeared and said that she looked forward to working with Finn again. Finn and Epiphany realized that Britt was the new chief of staff.

Elizabeth appeared, and everyone was in shock that Britt was the new chief of staff. Britt didn’t seem put off by the fact that Cyrus Renault (Jeff Kober) was a drug lord, and in fact she said that he had been exonerated and was now trying to do good.

Britt referenced the “gross mismanagement” at the hospital and the unethical actions of Bobbie Jones (Jacklyn Zeman) and Monica Quartermaine (Leslie Charleson).

Britt gleefully told Epiphany and Elizabeth to check their schedules because there had been some reassignments by the new head nurse. Elizabeth said Epiphany was head nurse, but Britt said that the new chairman of the board felt it was time to make some changes.

Elizabeth and Epiphany checked the computer and found out that Epiphany was bumped to an administrative position, while Elizabeth was shifted to a satellite crew and was no longer full time. Epiphany complained that Cyrus was messing with things that would put patients at risk.

Back at the gallery, Trina arrived to work, and the topic of the homecoming dance came up. Trina said it was hard not to think about what happened at the last dance she went to, and Ava assured her that nothing like that would happen again.

Ava wondered if Trina and Cameron kissed again, but Trina said no. Trina then mentioned Josslyn’s grandfather, and Ava took off to go to Turning Woods to support Sonny.

At Turning Woods, Ava found Sonny alone in the hallway outside of Mike’s room. Ava offered her help to Sonny. And in Mike’s room, Josslyn thanked Mike for everything and told him that she loved him very much. Mike slowly gave Josslyn two thumbs up.

That was a terrific episode of General Hospital, and there’s much more coming next week, so stay tuned! We’ll give you updates over the weekend as GH news comes in. Stick with the ABC soap and don’t forget that CDL is your go-to place for all the latest General Hospital spoilers, news, and daily episode recaps.

WATCH: Josslyn imagines a future where she and Mike had more time together. @RealEdenMccoy @MaxGail #GH pic.twitter.com/K7d7m5xq2H