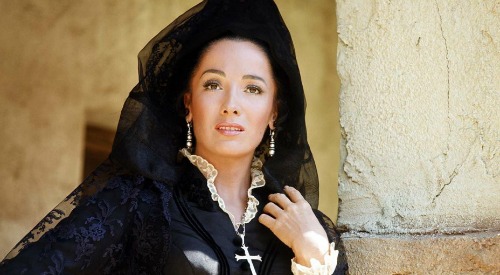 General Hospital (GH) spoilers reveal that one ABC soap alum has passed away. Linda Cristal was found dead at the age of 89 according to her son, Jordan Wexler. Wexler told The New York Times that Cristal died in her sleep at her Beverly Hills home on June 27.

The Argentine-born actress was perhaps best known for her work as Victoria Cannon on The High Chapparal, a western featured on NBC from 1967-1971. However, longtime GH fans may remember Cristal from her run on General Hospital as well.

Cristal played the role of Dimitra back in 1988, so this is sad news for the soap world. It’s always tough to hear about the loss of a daytime drama alum, but Cristal left her mark on the film and television industry. This talented performer was featured in plenty of primetime shows and movies.

You might’ve seen Cristal on Fantasy Island, The Love Boat, Barnaby Jones, Bonanza, The Alamo and many other projects over the years. Cristal was a lovely lady with a style all her own! Her impressive performances will always be remembered with admiration and looked back on fondly.

General Hospital viewers certainly send lots of support to Cristal’s loved ones during this difficult time. Many hearts were touched by Cristal’s work and just as many will mourn the loss.

“Rest in Peace to the ground-breaking Linda Cristal,” said one Twitter user. “RIP Linda Cristal…Thank you for those memories,” said another. “A sad farewell to actress Linda Cristal,” one more fan tweeted. “I always thought she was so pretty.”

As for what’s next on General Hospital, there are more classic theme weeks in store while we await new episodes. Unfortunately, GH probably won’t be going back as far as the 80s anytime soon. Characters like Cristal’s Dimitra won’t be popping up again, but there’ll be other blast-from-the-past characters and moments.

GH is hoping to resume production by mid-July, so we’ll see if that plan works out. General Hospital spoilers say several storylines are set to heat up down the road. There’ll be more updates to pass along as we get closer to fresh content.

CDL’s the place to be for all the General Hospital spoilers, updates and news you need, so be sure to check back regularly.