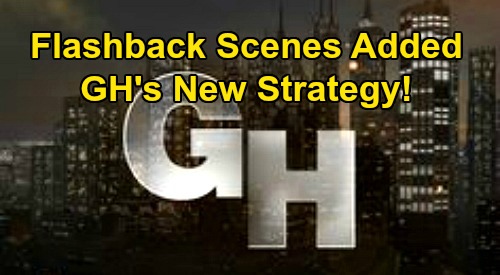 General Hospital (GH) spoilers reveal that viewers have noticed a big change in some recent episodes – and there’s a good reason why. COVID-19 aka the coronavirus forced GH to suspend production, which means the cast and crew can’t get back in the studio to film new episodes. They have to stay safe at home, so General Hospital’s supply of episodes is rapidly dwindling.

To slow things down and keep the show on the air longer, episodes are now being padded with flashbacks. Some examples include Nikolas Cassadine (Marcus Coloma) remembering Spencer Cassadine’s (Nicolas Bechtel) outrage and rejection.

Peter August (Wes Ramsey) and Maxie Jones (Kirsten Storms) got a nice love story recap as well. Plus, we were given reminders of Robert Scorpio’s (Tristan Rogers) longtime suspicions regarding Peter.

Even going back to Nina Reeves’ (Cynthia Watros) bio daughter reveal episode, that show was clearly split into two though flashback padding.

This is an excellent strategy to stretch new content and keep GH on the air. Naturally, that hasn’t stopped some General Hospital fans from complaining. Some viewers are able to look at this logically and cut the show some slack, but others are intent on griping.

Since fans have been speaking out, let’s look at what some of them had to say on Twitter.

“So more flashbacks, ok, I’m getting used to them,” one viewer tweeted. “If it means GH will be on longer with new episodes, I’m ok with it. They are well done.” Another fan grumbled, “Half the show is flashbacks. I get they want to extend the new shows, but this is a bit crazy.”

“These flashbacks are entertaining and well put together,” said a different fan. “I’m sure I’m in the minority here, but whatever it takes to keep the episodes running. “All these flashbacks [are] lame they definitely dragging this episode out,” one more viewer insisted.

Of course, that’s exactly the point: dragging the episodes out. Some GH watchers may claim they’d rather just have the show burn through all their episodes, but is that really true? Something tells us that won’t be the case when GH does indeed run out of episodes to air. Then, there’ll be complaints about them running out of shows!

This situation isn’t ideal, but it’s necessary. A pandemic is going on, so General Hospital’s trying to keep us all entertained for as long as possible. Kudos to editing team for doing such a fantastic job!