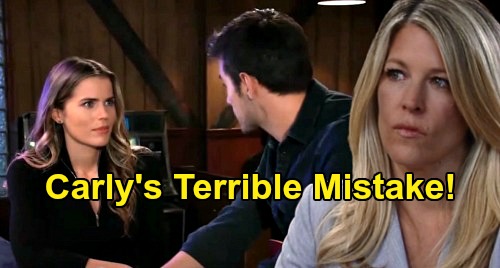 General Hospital (GH) spoilers reveal that Carly Corinthos (Laura Wright) is keeping a huge secret from Michael Corinthos (Chad Duell) – one that’ll inevitably come back to bite her eventually. As a schemer herself, Carly can spot one a mile away! It didn’t take Carly long to realize the “affair” Sasha Gilmore (Sofia Mattsson) and Harrison Chase (Josh Swickard) were having was a scam.

Of course, it was nice to have at least one character with common sense in the midst of all that. Michael and Willow Corinthos (Katelyn MacMullen) look pretty dense for falling for it so easily. Since there was a custody battle to prep for, it should’ve dawned on Willow and Michael that this out-of-the-blue betrayal wasn’t legit.

However, then we might not have much of a story, so we can’t blame General Hospital writers too much for taking this route. Carly, on the other hand, should get plenty of blame once the truth ultimately comes out!

Although Carly refused to let Sasha confirm her suspicions, it was understood between them that Carly knows what really happened. Carly later thanked Chase in a roundabout way as well.

It doesn’t seem right for Carly to think she can get by with this on a technicality! Carly knows Michael and Willow have suffered a great deal in the aftermath of their breakups. She had the power to end that suffering, but she chose to keep her mouth shut.

Some might say Carly’s putting Wiley Quartermaine-Corinthos (Erik and Theo Olson) first, but is that Carly’s call to make? As Michael’s mom and someone who cares about him, didn’t Carly have an obligation to fill Michael in and let him make his own choices?

There’s also poor Willow, who’s been through enough as it is. Carly hurt Willow by staying silent as well.

Now Michael and Willow are both locked in a new marriage. Although it gave them an advantage in the courtroom, was the cost really worth it? Carly certainly seems to think so, but that doesn’t change the fact that she did what she thought was best.

Instead of letting Michael decide for himself, Carly decided for him – which is her usual MO to be honest.

How would Carly feel if Sonny Corinthos (Maurice Benard) cooked up some plot to pretend he was cheating and Michael knew about it? Would Carly want Michael to tell her the truth? Absolutely!

Carly would be furious with Michael for keeping a secret like that under wraps – much like Michael should be after this affair lie is exposed.

Since Sasha seems to be headed for an overdose, that could lead to her death or at least a difficult fight for her life at GH. No matter how things play out, this storyline isn’t going to end well for Sasha.

Is Carly partly to blame for keeping quiet? Was it wrong for Carly to let Michael marry Willow without spilling the fake cheating news?