General Hospital Spoilers: Jason and Michael’s Friendship Needs to Be Even Stronger – GH Fans Want More of This Special Bond 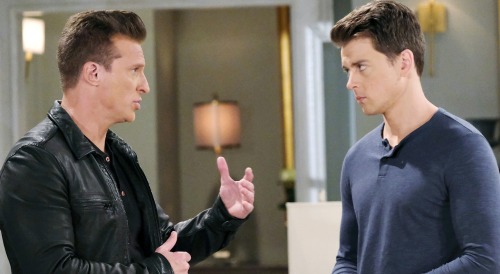 General Hospital (GH) spoilers reveal that there’s one relationship in Port Charles that many fans would like to see more of. Jason Morgan (Steve Burton) has always been a special part of Sonny Corinthos (Maurice Benard) and Carly Corinthos’ (Laura Wright) lives. Since Jason’s so close to their family, that’s given him a strong bond with “CarSon” and their kids.

However, Jason and Michael Corinthos’ (Chad Duell) relationship is extra special in many viewers’ eyes. It’s been highlighted in some of these GH encores that have been airing.

Jason steps up for Michael when it counts and always has. Of course, Jason lost some time while he was stuck at the Russian clinic, but his life’s back on track and he’s rebuilt all his familiar connections.

Even so, plenty of General Hospital fans would like to see more of Jason and Michael’s friendship. Their reunion after the real Jason came back was certainly a sweet one, but we really haven’t gotten a ton of Michael and Jason moments since then.

Jason had some words of wisdom about Wiley Quartermaine-Corinthos (Erik and Theo Olson) and Nelle Benson Jerome (Chloe Lanier) not too long ago, but conversations like that seem rare. Sometimes it feels like Jason’s too busy saving the world! Jason doesn’t have time to really keep the strong relationships in his life quite as strong as they should be.

GH writers could easily change that when the ABC soap returns with new episodes. Would you like to see more scenes featuring Michael and Jason? Should Jason’s role as a friend and mentor to Michael be highlighted a bit more? It’s great for General Hospital to have some heart to go along with all the action and drama.

It’s also nice to see Jason’s emotional side – just like when he was there for Sonny at Turning Woods. Maybe Jason can find new ways to be there for Michael as well down the road. Michael might need some help to navigate his new marriage to Willow Corinthos (Katelyn MacMullen) as well as joint custody with Nelle if that’s how things pan out.