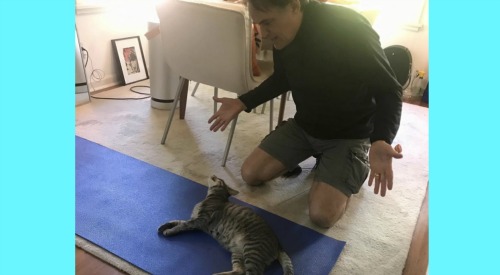 General Hospital (GH) spoilers has some fun news to pass on about a popular GH star. Jon Lindstrom, who portrays Kevin Collins and Ryan Chamberlain on the ABC soap, has been staying at home like everyone else during this period of quarantine. And that means he’s been spending quality time with one very important member of his family – his cat, Schmidt.

Schmidt looks to be a grey tabby who quite enjoys the camera. And given the hashtags that Jon uses in his Schmidt posts on Instagram, it appears that Schmidt is a rescue cat. He certainly looks right at home in the recent photos that Jon has shared. We’d say that like a lot of people’s pets, Schmidt is enjoying having Jon around more at home these days.

In one Instagram post, Schmidt is shown lounging on Jon’s lap, looking extremely content. Jon’s caption reads: “What’s that? You want to get up? Yeah, uh…no.” Of course, cat owners know exactly how demanding our babies can get when they’re settled in on a lap and then we have the audacity to move or want to stand up!

One fellow cat owner commiserated with Jon over his predicament in having Schmidt owning his lap. This person commented: “I tend to have the same problem, Jon. Isn’t it great to be loved by your cat?” And another follower of Jon’s commented: “Well, we all now know who is the boss of the house.”

In another post, Jon shared a photo of Schmidt lounging on his yoga mat as he was trying to to some stretches. Of course, for a cat, a yoga mat looks like a great place to lay down and take a nap, regardless of whether there’s a person actually trying to use the mat for something productive!

Jon’s caption for this photo reads: “Trying to get a little stretch in here, you! Sheesh!” One of Jon’s followers responded by saying: “I believe Schmidt wants you guys to do stretching exercises together!!”

Jon’s most recent post involving Schmidt is a cute video of the kitty engaging in a couple acrobatic jumps, with Jon doing some humorous commentary in the background. Jon’s caption for the video reads: “Kitten von Schmitten making his way to the finals.” Schmidt makes a couple of dramatic jumps, and it’s well worth a view!

At any rate, it’s fun to see what the soap stars and their pets are doing at home during the quarantine. We hope to see some more great pictures and footage of Schmidt going forward! Stay tuned to the ABC soap and remember to keep CDL bookmarked for the latest General Hospital spoilers, news, and daily recaps.

Trying to get a little stretch in here, yo! Sheesh! #kittenvonschmitten #schmidt #catsofinstagram