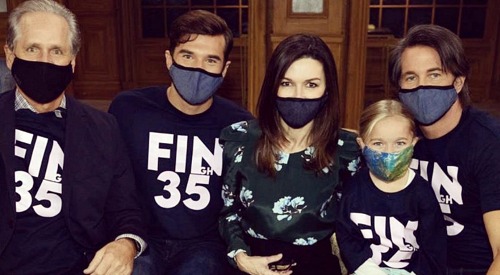 General Hospital (GH) spoilers has some great news to report. Jophielle Love, who portrays Violet Finn on the ABC soap, is apparently back on the GH set and has been reunited there with her TV dad.

On her Instagram feed, Jophielle shared some nice photos of herself and Michael Easton (Hamilton Finn) reuniting at GH, presumably for the first time since the pandemic began.

Jophielle posted several photos of herself and Michael, including them sharing a sweet embrace and being playful behind the scenes. Jophielle also posted a picture of herself outside of the General Hospital studios looking happy and ready to get back to work.

Jophielle’s caption for the photos reads: “Excited…Reunited…and way too spoiled! Missed you my GH daddy! #michaeleaston @generalhospitalabc.” Both Jophielle and Michael look thrilled to be back together, and this can only mean that we should be seeing Jophielle on screen shortly, which is great news for GH fans.

In fact, lots of fans have been replying to Jophielle’s post with well-wishes and congratulations about Jophielle being back on the show.

One person commented: “So excited to see Violet on GH again!! So missed!!” And another person wrote: “Yay!! It’s so awesome to have you all back on GH! I love your little Port Charles family!”

The timing of Jophielle’s return to GH will be interesting, especially since Alex Devane Marick (Finola Hughes) has just assumed the identity of Anna Devane (Finola Hughes).

That puts little Violet and dad Finn in terrible danger, but they’ll presumably be going about life thinking that they’re dealing with Anna when it’s really evil Alex!

We should also note that Jophielle also posted some reunion pictures with her GH mom Rebecca Budig, who portrayed Hayden Barnes on the show before the character disappeared.

Jophielle’s comments on the photos suggested that she was recently reunited with Rebecca as well, but the photos don’t appear to be on set and may have been taken before COVID.

Whatever the case, it’s clear that Jophielle is back in the US after spending the lockdown in Europe with her family, and we should be seeing her on canvas soon. Are you excited to see Violet again?

Stay tuned to the ABC soap and don’t forget to check CDL frequently for all the latest General Hospital spoilers, news, and daily episode recaps. We’ve got you covered!