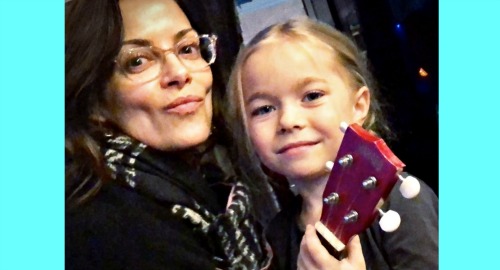 General Hospital (GH) spoilers has some fun news to pass on about a popular GH star and her awesome musical talents. Jophielle Love, who portrays Violet Barnes on the ABC soap, recently shared a sweet video on her Facebook feed that’s got social media buzzing. While GH fans await the return of their favorite soap to regular airtime reminders of the show are greeted with enthusiasm.

In the video, Jophielle sings a song that she wrote while playing a little ukulele. The video starts with Rebecca Budig (Hayden Barnes, GH) and Jophielle talking and Jophielle taking off a pair of rollerblades. Then, Jophielle starts playing her ukulele and singing her song.

It’s truly an adorable performance and Jophielle does a great job. Afterwards, Rebecca and some others applaud heavily and praise Jophielle’s musical talents. It’s truly a sight to see (and hear!), so be sure to check out the video below.

Jophielle’s video has garnered quite a few comments from her followers. One follower said: “How sweet. She should sing this on the show for Hayden.” And another said: “Very good! Make it happen, princess! Bring your GH mommy home!”

Of course, there are many GH fans who feel this way and would love to see Hayden return to Port Charles to reunite with Violet. As GH viewers know, Hayden fled Port Charles after Nikolas Cassadine (Marcus Coloma) led her to believe that Valentin Cassadine (James Patrick Stuart) was a threat to both herself and Violet.

But now that it’s become clear that Valentin is really not a threat, many GH fans are holding out hope that somehow Hayden is able to come home and return to the show. There’s been no word yet, or even buzz, about that happening, but we’ll be sure to let you know when and if such news becomes available.

One thing’s for sure – it was hard for Rebecca to say goodbye to GH when she left, and especially to Jophielle. In a tweet from back in November when Rebecca last aired on GH, she wrote: “It’s hard to say goodbye once…and twice is that much harder. Then add the beautiful, sweet, magical jophiellelove and it’s heartbreaking.”

Of course, given that Jophielle has some amazing musical abilities, that’s got some GH fans wondering. In response to the video, one person commented: “Love it! Great act for the 2020 GH Nurses Ball!!!!” It would certainly be an amazing turn of events if little Violet performed at the Nurses Ball, perhaps even with her dad, Hamilton Finn (Michael Easton).

What do you think of Jophielle’s song for her GH mom Hayden Barnes? Stay tuned to the ABC soap and don’t forget to check CDL often for the latest General Hospital spoilers, updates, and news.

This is my first original song “walking in the dark” that I just made up on the spot to sing to my GH mom @rbjobud … What do you think? I’m gonna get my friend @douglasladnier to help me polish it off a bit and teach me some ukulele chords and it will be … The Best! ; )If you want to watch the whole video and hear the whole song… follow me on facebook! @jophiellelove #paradigmyouth #youngsingersongwriter #youngsongwriter #youngsinger #walkinginthedark #jolove #jophiellelove #singing #ukulele #originalmusic