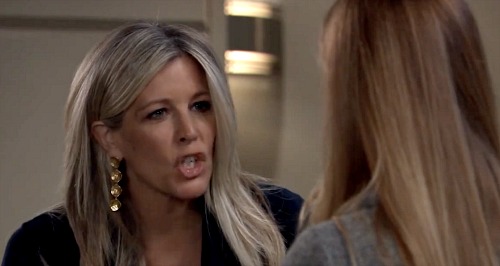 General Hospital (GH) spoilers has some news to pass on about a popular GH star. Laura Wright, who portrays Carly Corinthos on the ABC soap, has been tweeting quite a bit lately as she’s been spending lots of time at home during the coronavirus COVID-19 crisis, as we all are right now. Laura’s been active on Twitter and letting her fans know what she’s been up to, which is great.

Well, Laura recently shared with her fans that she was sick during the GH episodes that aired this past week. She tweeted: “The GH shows that are airing right now – I was soooo sick. I had missed 3 days of work (that has never happened). Every scene I was just trying not to cough. I would have a cough drop in my mouth up until the scene started.”

Laura then tweeted: “I’m grateful the GH crew were amazing and took care of me!! Lots of love – hot tea and cough drops. #GHFamily #GHcrew.” Laura got a lot of fan love in response to those posts, with many people replying that they hoped she was feeling better and wondering if everything was ok.

Laura then clarified: “Those shows were shot at the end of January….I’m all better. I was just watching and remembering how crazy it was. How we all held our breath hoping I’d get through a scene haaa…just some behind the scenes info.”

Of course, one of the scenes that aired on the same day as Laura’s tweets was a critical interaction between Carly and Nelle Benson Archer (Chloe Lanier). Carly and Nelle were on the roof of the hospital, and Carly raised her voice and yelled at Nelle. It’s pretty amazing that Laura was able to get through all of that while sick.

Fans had a lot to say about the situation. One responded: “You did great! No one would know you were sick. Great actress!” And someone else said: “Glad you are feeling better…tough to go to work when you are sick – I’m sure it’s 100x worse when your work is being on TV.”

And a couple of fans responded with humor to the situation. One person said: “Should have coughed on Nelle…lol just kidding of course…but my gosh, she drives me crazy…#lovehaterelationshipwithher such a great actress…” And another fan noted: “I thought Carly was going to push Nelle off the roof! Could not tell you were sick. Hope you are better now.”

At any rate, we’re loving all the social media posts from Laura, and it’s clear that fans love the behind-the-scenes insight on the show as well. We look forward to reading more in the days to come! Stay tuned to General Hospital and keep checking CDL for all the latest GH General Hospital spoilers and updates. We’ve got you covered on GH news!

The GH shows that are airing right now — I was soooo sick. I had missed 3 days of work (that has never happened) . Every scene I was just trying not to cough- I would have a cough drop in my mouth up until the scene started—.