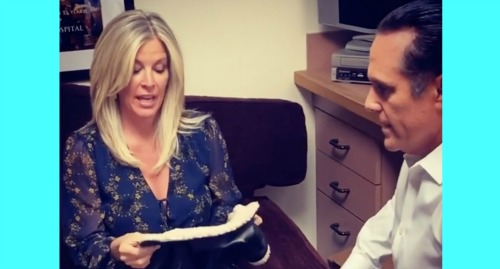 General Hospital (GH) spoilers reveal that Maurice Benard (Sonny Corinthos) has been sharing some ongoing behind-the-scenes “drama.” On Instagram, Benard posted part one of the action a few days ago. To recap so you’re caught up for part two, Benard was filming a video when Chad Duell (Michael Corinthos) and Katelyn MacMullen (Willow Tait) pretended to interrupt with some very important news.

Duell suggested they were trying to do Steve Burton (Jason Morgan) a favor when they accidentally shrunk his trademark leather jacket. Benard pretended to be shocked as Duell and MacMullen feigned panic over the situation. “I just don’t know what to do,” Duell said. He quickly shut the door after insisting that Burton was coming.

“What happened, man?!” Benard asked. “He’s going to be upset. Look at the jacket! Look how small it is!” MacMullen hilariously stood in the background covering her mouth in horror. Benard ultimately told Duell to just stash the jacket in a drawer, where Duell found a photo of Benard shirtless. He held it up for the camera as Benard erupted into laughter.

The whole thing was just a fun little skit Benard staged with his costars, but it looks like there are always a lot of laughs at the GH studio. Benard later decided to keep the fun going with part two of his video series. He suggested he might post a part three if General Hospital fans were interested.

Part two of this leather jacket saga took the help of two other GH cast members. Laura Wright (Carly Corinthos) was in the video with Benard, which was shot by Wes Ramsey (Peter August).

After asking if it was that bad, Wright told Benard to let her see it. He pulled the tiny jacket, which was clearly meant for a toddler, out of the drawer. Wright acted horrified as they debated what would happen when Burton saw it.

“You know Steve. He likes to look buffed,” Benard said. “He’s gonna look buffed,” Wright replied. Benard wasn’t so sure Burton could even get his arm in there!

We can only hope that if Benard indeed films a part three to conclude this saga, it features Burton’s reaction to this fake leather jacket blunder. We definitely look forward to hearing more updates on this mini storyline they’ve created.