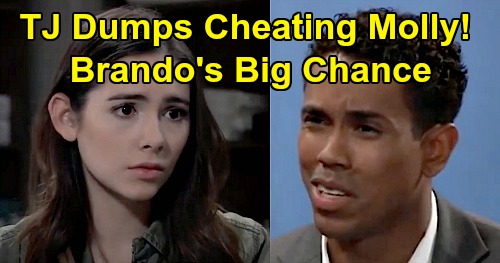 General Hospital (GH) spoilers tease that Molly Lansing-Davis (Haley Pullos) has a huge secret that’s destined to blow up. Molly was stunned when she realized TJ Ashford (Tajh Bellow) had been kidnapped and injured. She’d pretty much convinced herself that TJ had dumped her and was moving on with his life.

Sadly, that could still be the outcome for Molly once the truth comes out! Molly slept with Brando Corbin (Johnny Wactor) without knowing for sure that TJ had broken up with her. She just made assumptions based on TJ’s lack of communication and Jordan Ashford’s (Briana Nicole Henry) comments.

Molly wouldn’t have hooked with Brando if she’d known what was really up with TJ. However, TJ may feel like Molly threw away what they shared too fast. Even if Molly though things were over, she was awfully quick to jump in bed with somebody else! That’s bound to sting for TJ once this secret’s inevitably exposed.

Of course, Molly will do everything in her power to make sure that doesn’t happen. She doesn’t want to hurt TJ or rock the relationship boat again, so she’ll work hard to keep this hookup news quiet.

However, we know Molly will at least open up to Kristina Corinthos-Davis (Lexi Ainsworth). It looks like Sam McCall (Kelly Monaco) may get updates on this Molly and Brando hookup as well.

There’s always the potential for eavesdropping and secret spillage. We certainly can’t rule out a pregnancy yet either. That’s a possibility to consider here, especially since it’d give Molly a reason to come clean.

It would at least rev up the pressure and make matters more complicated – and complicated tends to be a good thing on soaps!

No matter how the truth comes out, you can bet that it will. What will TJ’s reaction be when he learns Molly betrayed him? Again, TJ’s surely going to think it all happened way too fast.

TJ may wonder how Molly could just have a one-night stand like it was nothing. TJ might argue that if he thought Molly broke up with him, it’d be months before he could even think about moving on.

Even if TJ could get past the confusion of it all and cut Molly some slack, could he get past her deception? Molly probably would’ve been better off confessing sooner. No one can blame Molly for not springing this on TJ at GH. After all, TJ had just been through a terrible, traumatic ordeal.

Even so, Molly already planned to brush this hookup under the rug permanently. In a panicked state, Molly insisted this never happened and pushed Brando to just forget what they did. It doesn’t sound like Molly has any intention of making an admission, so this General Hospital shocker may have to come out another way.

If TJ hears about this betrayal from someone else, it could hit him harder. General Hospital spoilers say more trouble is brewing in Port Charles. Molly could find herself dumped over her cheating and lies!

Will that free Molly up to move on with Brando? Will Brando help heal Molly’s broken heart? Maybe this could be Brando’s big chance at romance. GH fans won’t want to miss what’s in store. CDL’s your hotspot for General Hospital spoilers, updates and news, so be sure to stop by regularly.