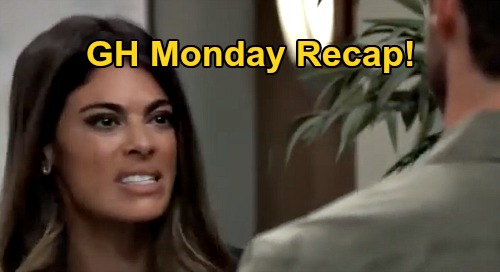 Elizabeth told Franco that she wasn’t planning on going to Ava Jerome Cassadine’s (Maura West) portrait unveiling the following night. Franco and Elizabeth were uncomfortably discussing this when Felix called Elizabeth away.

Elsewhere in the hospital, Lulu Spencer (Emme Rylan) asked Ned Quartermaine (Wally Kurth) for a comment about the rumors that Cyrus had offered to bail GH out of its financial trouble and that ELQ was going to block that attempt.

Ned said no comment, and then he and Lulu talked off the record. Ned said that he was going to call an emergency ELQ meeting the next night and that hopefully they’d get the vote they needed to be the hospital’s sole backer.

Ned shared with Lulu that someone was making a play for ELQ by buying up shares, and Lulu worried that Cyrus would swoop right in if ELQ didn’t save GH. Cyrus walked up and the typical banter ensued about Cyrus being a drug lord but having been completely exonerated.

Cyrus said that he had a new organization devoted to social justice that would demonstrate his character. Cyrus ambled off, and Lulu told Ned that they needed to stop Cyrus.

In another area of the hospital, Sonny Corinthos (Maurice Benard) asked Brando Corbin (Johnny Wactor) to take him through what happened at the garage earlier that day.

Brando started out by saying that he worked on Jason’s bike, and Sam McCall (Lindsay Hartley) rushed up, accusing Brando of sabotaging Jason’s bike. Sam and Brando yelled at each other until Sonny got in between them to break it up.

Just then, Elizabeth walked up and said that Jason was in a room and that Sam could see him. Sam and Elizabeth rushed off, and Sonny asked Jason if there was any chance that he had made a mistake on the bike or installed a faulty part.

Brando said absolutely not. Brando then flashed back to Cyrus being in the garage and wanting to discuss something, but he didn’t tell Sonny about that.

Ava sat down at the table and bantered with Nelle, eventually revealing that she knew that Nelle had blackmailed Julian. Nelle walked off, and Ava remarked that Julian should just kill Nelle. Ava left, and Nelle returned as Julian kept drinking his scotch.

Meanwhile, Valentin Cassadine (James Patrick Stuart) talked with Martin Grey (Michael E. Knight) via phone in another area of the Metro Court, and Nikolas overheard Valentin say that he wanted to keep things “under wraps” and bickering ensured.

Nikolas asked that Valentin not attend the portrait unveiling at Wyndemere tomorrow night, and Valentin said that none of that was his concern.

Harmony wanted to congratulate Willow and Michael on their marriage. Willow called Harmony out on associating with Cyrus, which she knew about from Michael and Jason. Harmony was taken aback but didn’t acknowledge that she was working for Cyrus.

Michael stepped away to take a call and returned with the news of Jason’s accident. Harmony took off, and Michael and Willow chatted about the custody hearing. Soon, Diane Miller (Carolyn Hennesy) called to say that the judge had made his ruling and that they needed to go to court first thing tomorrow morning.

At Jordan Ashford’s (Briana Nicole Henry) office, she and Curtis Ashford (Donnell Turner) argued bitterly when Jordan revealed that she had been to Cyrus’ apartment. Curtis wanted to go to Mac Scorpio (John J. York) and tell him that Jordan was under Cyrus’ thumb, but Jordan refused.

After a lot of back and forth over what to do, Jordan revealed that she was going to give a press conference to extol Cyrus’ virtues. Curtis was peeved, and Jordan left in a huff.

Back at GH, Sam and Elizabeth went to Jason’s room, and Elizabeth reported that the surgery had gone well but that Jason was still unconscious. Sam sat alone with Jason until Felix came in and said that Sam’s parole officer was downstairs asking to see Jason.

Sam asked Felix to stall her parole officer, and she immediately called Valentin, asking him to get to the hospital. Valentin showed up, and Sam agreed to give Valentin her two kids’ ELQ voting proxies in exchange for a new parole officer.

Near the nurses’ station, Nikolas found Elizabeth and expressed his concern about Jason. Nikolas thought that perhaps Elizabeth needed a friend. Elizabeth balked a bit, and Nikolas took her hand.

Just then, Franco walked up and noticed the scene, and Ava barged up and called out to Nikolas. Franco and Elizabeth walked off together, and Ava and Nikolas bickered with each other. Then Nikolas walked off and texted Spencer about talking soon about “our family’s future.”

Near the elevators, Brando and Sonny were still talking. Sonny said that he needed to go check on Carly Corinthos (Laura Wright), but that they weren’t done yet. Brando stood there looking unnerved, and Harmony walked by and said hello to Brando. Brando looked after her uncomfortably.

Elsewhere in the hospital, Lulu got notification on her phone that Jordan was giving a press conference. Lulu and Ned watched the conference on Lulu’s phone.

Jordan started in about how Cyrus was convicted of crimes that he did not commit, and that he’s an innocent man. Back at his apartment, Cyrus watched the press conference on his tablet, happy with Jordan’s performance as she said that she’d do everything in her power to protect his reputation.

That was a terrific episode of General Hospital, and there’s more coming tomorrow, so stay tuned! We’ll give you updates as more GH news comes in. Stick with the ABC soap and don’t forget to check CDL frequently for the latest General Hospital recaps, news, and spoilers.