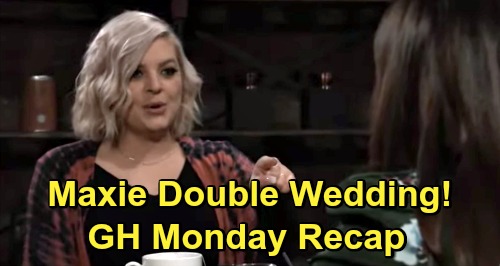 General Hospital (GH) spoilers recap for Monday, December 7, reveal that Franco Baldwin (Roger Howarth) got out of his hospital bed and reeled as he heard Peter August’s (Wes Ramsey) voice in his head.

Elizabeth Baldwin (Rebecca Herbst) walked in and put Franco back in bed and learned about the voice he was hearing. Elizabeth called Kevin Collins (Jon Lindstrom) in, and Kevin theorized that Franco might be projecting his fears in some way.

Scott Baldwin (Kin Shriner) entered the room and accused Kevin of psychobabble. Kevin said that there was a doctor in Geneva who might be able to tell him if the tumor was causing a voice in his head.

Franco said that he wanted to explore this, and that he’d put off radiation for a few weeks to make sure that this tumor wasn’t starting something much worse. It was determined that Scott would go with Franco to Geneva.

Over in Sasha Gilmore’s (Sofia Mattsson) room, Sasha talked with Michael Corinthos (Chad Duell), and she insisted that Michael didn’t owe her anything. Michael disagreed, saying that Carly Corinthos (Laura Wright) told him about the fake affair between Sasha and Harrison Chase (Josh Swickard).

Michael was kind to Sasha, and Sasha was happy to be back on good terms with Michael.

Violet had drawn a nice picture of their family, and when Violet stepped out of the room, Anna said that Violet’s grandfather was missing from the picture. Suddenly the doorbell rang, and it was Gregory Chase (Gregory Harrison), whom Anna had invited.

Anna took off, and soon Violet came downstairs and happily met her grandfather. Gregory told Violet a bedtime story that Finn recognized from his childhood.

After Violet went back upstairs, Gregory told Finn about his separation from Jackie Templeton (Kim Delaney) and he revealed that he was staying in Port Charles for the time being and teaching online.

At the coffee shop, Peter and Maxie Jones (Kirsten Storms) talked about their wedding plans. Maxie said that she didn’t want to wait, and that she wanted to push up the wedding.

Peter took off for a meeting, and Anna arrived just in time for Maxie to declare that they should have a double wedding with Anna and Finn. Anna didn’t look thrilled.

At the Metro Court, Dante Falconeri (Dominick Zamprogna) was looking at a photo of Lulu Spencer (Emme Rylan) when Valentin Cassadine (James Patrick Stuart) approached wanting to talk about a schedule for the kids.

Valentin managed to click his pen inadvertently, which caused Dante to react. Valentin wondered if everything was ok, and Dante covered, saying that it was just tough with Lulu not coming back.

Soon, Peter walked in to meet with Dante, and Valentin took off. Peter inquired as to whether Dante wanted to take some time off and spend time with Rocco Falconeri (O’Neill Monahan), but Dante refused, saying that he needed the routine.

After their meeting, Dante called Dr. Kirk (Christopher Cousins) and said that he was ready to complete the mission.

Back at the coffee shop, Maxie was going on about the double wedding idea and Anna was trying to tactfully decline when Anna got a text from Valentin saying he needed to see her asap.

Maxie took off and Valentin arrived, wanting to talk about Dante. Valentin said that he noticed that Dante seemed to be struggling and maybe the WSB let him go too early. Valentin wanted Anna to talk with Dante and get a read on whether he was ok.

At the Quartermaine mansion, Chase and Willow Corinthos (Katelyn MacMullen) talked. Willow said that there was something she needed to say to Chase, and after a lot of back-and-forth and stalling, Willow told Chase that she still loved him.

Willow explained that it took her by shock that Chase never cheated on her, and that none of this changes how she feels about Michael. Chase seemed encouraged and happy with this news.

Back at the hospital, Maxie entered Sasha’s room, who was still there talking with Michael. After Michael took off, Maxie said that she was encouraged to see the smile on Sasha’s face.

Meanwhile, Michael went back to the Q mansion, where he regrouped with Willow and learned about her talk with Chase earlier. Wiley Quartermaine Corinthos (Erik and Theo Olson) cried on the baby monitor and interrupted their talk.

Finally, back at Anna’s house, Chase arrived, and Finn noted that he was smiling for the first time in months. Chase said that he should have told Willow the truth a long time ago, but that it was better late than never.

Finn was happy for his brother, and he told Chase that their father was staying in Port Charles until his wedding to Anna.

That was a terrific episode of General Hospital, and there’s much more in store this week, so stay tuned! Keep coming back to CDL for all the latest General Hospital spoilers, updates, and news. We’ve got you covered on all the soaps!