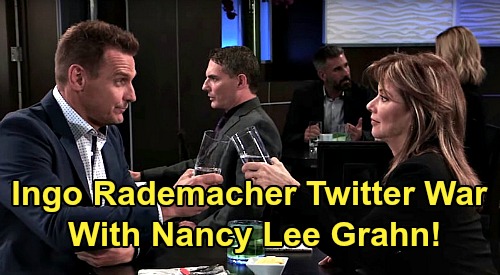 General Hospital (GH) spoilers has some news to pass on about a situation developing between a couple of GH co-stars. Ingo Rademacher (Jasper “Jax” Jacks) has reported on Twitter that Nancy Lee Grahn (Alexis Davis) has blocked him on the site.

Ingo tweeted a screenshot of the message that Nancy has his Twitter account blocked along with the following message: “A true liberal right there. I’m for free speech Nancy and would certainly never block any for their opinion.”

So, what’s going on here? Well, it started over on Instagram a couple of days ago, where Ingo posted a meme about COVID-19. The meme read: “No one thinks Chinese Americans are to blame for the Chinese Coronavirus. If you don’t have the intellectual capacity to understand we are referring to a country and not to an ethnicity, I can’t help you. You’re just an idiot.”

Ingo posted the meme along with the following caption: “And FYI before the haters come out, this is from my father-in-law’s brother who’s a proud Chinese American and Amen for that. #Germanmeasels #Spanishinfluenza #Chinesecoronavirus shall I go on. #Medicalterminology.”

Well, the conversation ended up migrating over to Twitter, with both Ingo and Nancy getting tagged on a lot of polarized fan/follower posts about the issue. Plenty of followers agreed with Ingo’s point of view, and plenty disagreed, and some tagged Nancy about the issue, thinking that she’d likely disagree with Ingo.

And in one reply to a follower, Ingo mentioned that he was “just trying to balance out Nancy’s POV” along with a laughing emoji. A follower then brought that statement of Ingo’s to Nancy’s attention on Twitter. This follower said: “Aye, @NancyLeeGrahn, gather your colleague and save him from his foolishness, lest he continue to use your name as justification for his stupidity.”

Nancy then responded: “I have seen these posts and will not engage. It is not my job to save anyone nor do I feel any responsibility for my cast-mates. No one can use my name for anything unless I give it credence. I have not & do not. I can only lead by example. I intend to do my very best at that.”

At some point after this post, Nancy blocked Ingo, which Ingo reported on his Twitter feed. Since then, Ingo has continued to engage with others on Twitter about the issue, including people who agree with him and those who disagree with him.

And Ingo is steadfastly defending himself in the matter. For example, one follower commented: “You brought her into it by commenting about her on your Instagram. So it’s ok for you to make rude remarks about her but you’re mad that she blocked you?”

To that, Ingo replied: “I said I’m balancing out Nancy. What’s wrong with that. Have a sense of humor about it.”

And another follower said: “Can’t think of a better person to not hear from again. I suppose you really lost sleep over being blocked by Nancy.”

To that, Ingo said: “I’ve known Nancy for a long time. Love working with her. She’s a great actress. I think you can have an opinion but I’m not for bashing people’s opinions. Have a discussion. Isn’t that why we have political debates? People can’t debate anymore. If u try, you’re just called a racist.”

We’ll see whether the debate continues on the matter with Ingo Rademacher and the Twitter-verse, but it seems pretty clear that Nancy Lee Grahn is out of the discussion, at least for the time being.

So far, NLG hasn’t commented further on the matter. We’ll be sure to keep you up to date on any developments going forward. Stay tuned to the ABC soap and be sure to check CDL often for the latest General Hospital spoilers, recaps, and news.

😂 A true liberal right there. I’m for free speech Nancy and would certainly never block any for their opinion. pic.twitter.com/EOa9h5Nb46