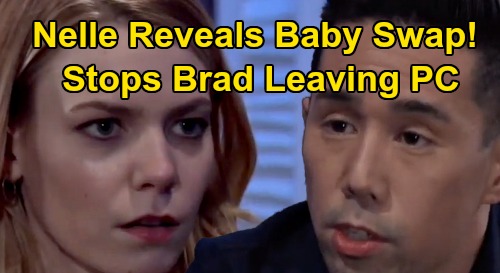 General Hospital (GH) spoilers tease that a long-awaited big reveal is FINALLY happening. The truth about “Wiley Cooper-Jones” (Erik and Theo Olson) is set to come out during the week of February 17-21. That’s right. You read that correctly. The baby swap shocker is going to explode at last!

GH fans have been waiting for what feels like forever. We all want Michael Corinthos (Chad Duell) to know that “Wiley” is actually his son, Jonah Corinthos. Let’s set the stage so you’ll know what to expect before the baby bomb drops.

For starters, Nelle Benson Archer (Chloe Lanier) will finally reach a deal for those ELQ shares. She’ll be satisfied with her payday, but what’s next? Nelle’s vision board has made it crystal clear that she expects to live a wonderful life with “Wiley.” She wants to make that dream a reality, so she’ll plan to take all her money, pack up “Wiley” and leave town.

However, Nelle’s plan will hit a snag when she realizes Brad Cooper (Parry Shen) has a similar idea in mind. General Hospital spoilers say Brad will have his eye on a new position in another city. He’ll also want to get the heck out of Port Charles with “Wiley” – and Lucas Jones (Ryan Carnes) of course.

That’s not going to work for Nelle, so what’s she going to do? Nelle will have a difficult choice to make, but she’ll feel it’s her only option. There’s no way Nelle’s going to stand by and watch “Brucas” move away with her baby Jonah Corinthos.

From the moment the switch happened, General Hospital fans have been wondering who would finally expose the secret. This swap story itself was a bit of a twist. Normally, a soap “baby mama” is trying to steal a kid, not give one away!

It turns out there’ll be a twist in the exposure as well. Everybody’s expecting someone to rat Nelle out, but it’ll be Nelle herself who unleashes the truth.

General Hospital spoilers say Nelle will reveal that “Wiley” is actually Jonah, but then what? Nelle must know she could go back to prison for this. Other GH news points to Nelle making a hasty exit on the sly in the week ahead.

Perhaps she’ll drop the bomb and leave Brad to deal with the aftermath! As for Michael, he’ll get some shocking updates and try to figure out how to process them.

General Hospital spoilers say some fantastic episodes are coming up. GH fans will definitely want to tune in and see all the chaos. We’ll pass along updates as other news on this storyline develops, so check back at CDL for some hot posts.