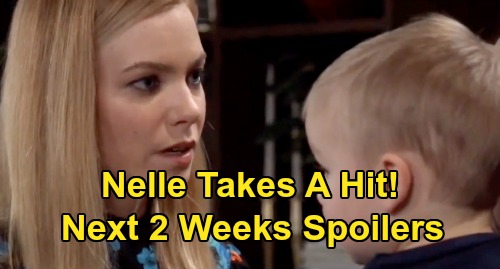 General Hospital (GH) spoilers for the next two weeks that some surprises are in store. During the week of January 20-24, Ava Jerome (Maura West) will accompany Nikolas Cassadine (Marcus Coloma) to Spencer Cassadine’s (Nicolas Bechtel) school. Nik will remain out of sight while Ava tries to prepare Spencer for what’s ahead. She’ll hope Spencer can forgive her after he sees that all isn’t lost.

Spencer will eventually turn around to find Nikolas standing there in the flesh. It’ll be overwhelming for Spencer to say the least! After Spencer grills Nik about going into hiding and letting everyone think he was dead, he’ll make his position crystal clear.

This isn’t something Spencer can just brush past quickly. Forgiveness will be a slow process, to Nik will have to accept that.

Later, Nikolas will sign Ava’s post-nup, but he’ll add a special condition of his own. Ava will agree to it, so it must not be too bad! She’ll count on things to work out just the way she wants, but they rarely do in Port Charles!

Meanwhile, Nelle Benson Archer (Chloe Lanier) will become a thorn in Willow Tait’s (Katelyn MacMullen) side. She’ll force Brad Cooper (Parry Shen) to push Willow away, so Willow will be beyond frustrated.

It’ll be tough for Willow to back off when crazy Nelle’s so close to “Wiley Cooper-Jones” (Erik and Theo Olson).

Afterward, Nelle will get pretty shaken up thanks to some shocking incident. Michael Corinthos (Chad Duell) will rush to Sasha Gilmore’s (Sofia Mattsson) defense in the moments that follow.

It sounds like Nelle may blame Sasha for some showdown that gets out of hand.

As for Jordan Ashford (Briana Nicole Henry), she’ll be summoned to help with an emergency. Sonny Corinthos (Maurice Benard) will wind up at the ER, so it’ll be interesting to see if all this involves Mike Corbin (Max Gail) or whatever mess Michael’s dealing with.

During the week of January 27-31, relocation will be on Michael and Sasha’s mind. GH fans know Michael recently suggested the idea of Sasha moving in with him, but she wasn’t keen on it. Sasha doesn’t want to move too fast and mess things up.

However, that risky run-in with Nelle we mentioned may change Sasha’s mind. She may not want to move in the Quartermaine mansion though, which may be why Michael chooses to relocate, too. They might want an apartment somewhere Nelle doesn’t even know about. It’s safer that way!

Other General Hospital spoilers say Sam McCall (Kelly Monaco) will pursue a new ally. She’ll find someone with a common goal and hope this could become a beneficial partnership.

As for Anna Devane (Finola Hughes), her protective side will be on full display. It sounds like Anna will defend Peter August (Wes Ramsey), but it’ll take a toll eventually. Anna will feel stressed to the max.

As for Sonny, he’ll tackle an enemy. Is that the mysterious enemy he’s plotting against or Marcus Taggert (Real Andrews) since he’s back in town?

Regardless, Sonny will have no intention of backing down. Next, Maxie Jones (Kirsten Storms) will catch up with Damian Spinelli (Bradford Anderson) over breakfast. Spinelli may interrogate Maxie a bit about Peter and worry about him hurting her.

Back with Nelle, her luck will take a wrong turn and the result will be pure misery. Finally, Nina Reeves (Cynthia Watros) will deal with disgust. She won’t be happy about something at all – so that could be Nelle related since they have a history.

"If there's a turf war brewing in Port Charles, I need to know about it!" #GH pic.twitter.com/iMh0lZYuJZ