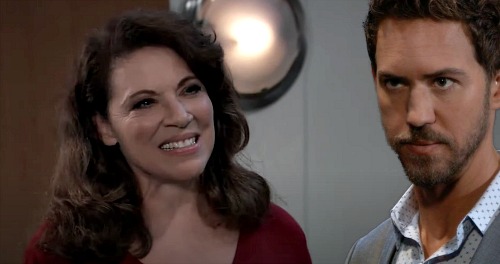 The mission was clear – Dante is supposed to investigate Peter August (Wes Ramsey) and Anna Devane (Finola Hughes) to determine if they conspired to frame Obrecht.

Of course, GH viewers know that Anna didn’t conspire with Peter, but Peter definitely framed Obrecht. Anna did, however, cover for Peter not knowing what he had done. But Obrecht is still hell-bent on bringing Anna down right along with Peter, since Anna was complicit in protecting her son.

Well, now that Dante’s in Port Charles, it’s time for his mission against Peter to begin. And since General Hospital spoilers tell us that Dr. Kirk was supposed to follow Dante to Port Charles and keep him focused on the mission, it’s only a matter of time before Dr. Kirk appears on the scene.

He’ll probably be clicking his pen and keeping Dante conditioned to stay on the Peter investigation until he finds something incriminating or catches Peter doing or saying something that implicates him.

Of course, Obrecht will also want Dr. Kirk to keep her appraised about what’s going on in Port Charles with the people she loves.

As GH viewers know, Obrecht was devastated when Britt Westbourne (Kelly Thiebaud), Nina Reeves (Cynthia Watros), and Maxie Jones (Kirsten Storms) denounced her before she was carted off to The Hague.

And while Obrecht’s main mission is clearing her name and bringing Peter and Anna down, she’s going to want to keep her finger on the pulse of Port Charles.

We can only imagine Obrecht’s reaction when she learns that Maxie is pregnant with Peter’s baby and that the couple is now engaged. Obrecht really cares for Maxie, and she’s probably going to be horrified to learn that Peter is going to be a dad and a permanent part of Maxie’s life all wrapped up into one.

General Hospital spoilers say That will light a fire under Obrecht to push Dante to take swift action where Peter is concerned.

Of course, we don’t know how long it will take Dante to build a legitimate case against Peter. So far, even Damian Spinelli (Bradford Anderson) has been unable to track down any definitive proof that Peter committed the crimes that he’s suspected of committing, and Spinelli has access to high-tech surveillance tactics.

GH buzz hints that Obrecht might decide that this whole mission to expose Peter might take too long, and that perhaps the mission should change to one of elimination!

Will Obrecht decide to permanently rid the world of Peter, perhaps to save Maxie from him? That would be a tough move for Obrecht to make, especially since she really needs hard proof that Peter framed her so she can get out of custody and clear her name.

But then again, Obrecht might figure that Maxie is in imminent danger, and that a change in the mission is warranted. Or Obrecht could order Peter to be eliminated once Dante finds the proof she needs.

We’ll see what happens here, but something tells us that Dante may still be susceptible to some psychological manipulation where Dr. Kirk is concerned. Could Dr. Kirk, through Obrecht, possibly get Dante to take some tactics that he ordinarily wouldn’t take…like killing Peter?

Do you think Obrecht will change her tactics and go for the kill after she finds out that Maxie is about to be tied to Peter forever? Stay tuned to General Hospital, and be sure to check out all of our GH spoilers, daily episode recaps, and news. Here at CDL, we’ve got you covered!