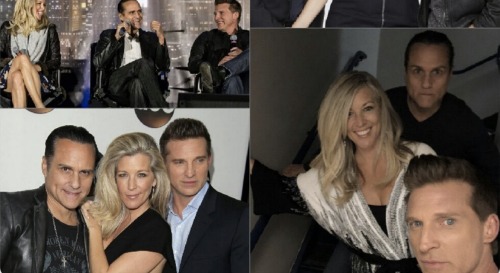 General Hospital (GH) spoilers reveal that many ABC soap stars are ready to get back on set and film some new episodes. Unfortunately, there’s no confirmation yet on when they’ll be able to do that. It’s all about staying safe, so the cast and crew will have to wait until the COVID-19 aka coronavirus dies down.

On the bright side, plenty of GH cast members are active on social media. At least fans are able to stay connected with some of their favorites! Laura Wright (Carly Corinthos), Maurice Benard (Sonny Corinthos) and Jason Morgan (Steve Burton) are certainly faves for many viewers. They bring some fantastic characters to life in Port Charles and entertain us all each week.

Both Carly and Sonny have a strong friendship with Jason, who adores their children. Jason’s become part of their family over the years, which brings the kind of love and loyalty that GH viewers like to see. It’s not surprising that Sonny, Carly and Jason have become such a popular trio.

One General Hospital fan made a collage to celebrate these three on Twitter. Laura Wright weighed in on the great pics and offered gratitude for her beloved costars. It’s sweet that Wright, Burton and Benard get along so well in real life, too!

“So grateful for these guys !!! @MauriceBenard @1SteveBurton thank you @FaishawnCoulter,” Wright said in response to the Twitter user. Wright’s definitely good about popping in social media and seeing what fans are buzzing about. It was nice of Wright to send Burton and Benard a little love during their downtime from the show. It’s safe to say many GH viewers are sending their love as well.

As for what’s next in Port Charles, there’s much more Cyrus Renault (Jeff Kober) drama to come for Sonny. Jason will remain heavily involved in that storyline, but it won’t be the only challenge they tackle. Sonny will also need Carly and Jason’s support as he prepares for Mike Corbin’s (Max Gail) grim fate.

There’s also the custody battle for Carly to get wrapped up in. As Michael Corinthos (Chad Duell) and Nelle Benson Archer’s (Chloe Lanier) court date draws near, Carly will grow increasingly concerned. Nina Reeves (Cynthia Watros) is a real wildcard since no one knows for sure what she’ll do on the stand.