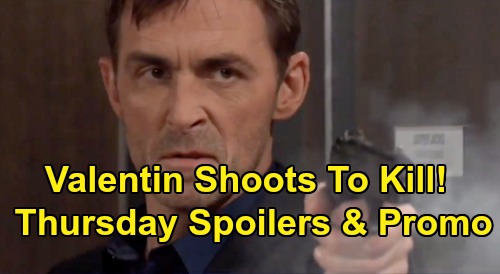 Obviously, a horrified Nelle’s going to wonder why Brad would put everything in jeopardy. Of course, we have to ask why Brad would tell Nelle! He’s putting a target on his husband’s back since Lucas can’t recall the confession.

Brad may point out that their secret’s still contained, but Nelle will have a great reason to take Lucas out if the opportunity arises. She certainly won’t want Lucas remembering anything!

Other General Hospital spoilers say Harrison Chase (Josh Swickard) will check in with Willow Tait (Katelyn MacMullen). He’ll seem concerned about Willow, so he may wonder how she’s handling things now that Lucas is awake.

It’s a huge relief since Lucas is the level-headed one who knows Nelle’s bad news, but it’s also a reminder that Willow isn’t a true parent to “Wiley.” He’s got his dads and Willow’s nanny help may not be needed after Lucas recovers.

Willow will inevitably face more heartbreak once the baby swap is exposed, but Chase will try to ease her current pain for now. At GH, Epiphany Johnson (Sonya Eddy) will fly into a rage. She’ll ask if she can help someone, but her tone will be far from helpful!

Sam McCall (Kelly Monaco) just bumped into her parole officer, Delores, as she was leaving her secret meeting with Jason Morgan (Steve Burton). Delores insisted they have a problem, but there’s a good chance they’ll have a bigger one if she catches Jason coming out of that room.

Fortunately, Sam will come up with an idea on Thursday. She’ll hope it’ll save the day – and it sounds like it just might. Perhaps Epiphany’s outburst will be a useful distraction as Jason tries to avoid getting caught. Epiphany’s always glad to voice her opinion and it could work in “JaSam’s” favor this time.

Peter’s got far more important things on his mind, but he’ll have to focus on Lulu for at least a few minutes.

Over with Dustin, he’ll be looking pretty spiffy at the Metro Court. Dustin will have a nice suit on when someone presumably asks about his date with Lulu. He’ll reply that his date is with someone else, so this may involve a meeting with Jasper “Jax” Jacks (Ingo Rademacher). Since Dustin will end up in Jax’s office soon, he may have some work-related matters to discuss.

Back in the summer, Jax hired Dustin as the official driver of Aurora Media’s print division. It was mostly just a title so Dustin could play in the softball game, but maybe Dustin will want to revisit the topic and make a little more cash.

Unfortunately, there could be a terrible reason for Dustin to suddenly be in Jax’s office – and it involves Valentin Cassadine (James Patrick Stuart).

GH fans know Valentin just received some awful news – a double dose of it actually! He found out he’s not really a Cassadine before heading to the gallery, where he overheard that Jax kissed Nina Reeves (Cynthia Watros).

On Thursday, Ava Jerome (Maura West) will tell Nina that Valentin is going to kill Jax. She won’t mean it seriously, but Valentin could indeed have that plan in mind.

General Hospital’s weekly preview video shows Valentin bursting in Jax’s office and pointing a gun at him. When Jax asks what he wants, Valentin replies, “Just this.” He fires a shot, but is this a fantasy or reality?

The inclusion of random Dustin at least presents the possibility that it’s real. It’s weird to throw him in this scene.

It’s possible Dustin will take the bullet or will leap into action to avoid Valentin having better aim with the next one. Laura Collins (Genie Francis) recently pointed out that Dustin probably wasn’t looking to make a habit of landing in dangerous situations, but they’re simply unavoidable in Port Charles!

Naturally, if this is a fantasy or if no one’s injured, Valentin may find a way to wiggle out of trouble as usual.

Finally, General Hospital spoilers say Hamilton Finn (Michael Easton) and Anna Devane’s (Finola Hughes) conflict will explode. Things have been tense, but not like this! Finn will shout that Peter’s guilty as Anna looks at him with tears in her eyes. These two may be on the verge of a breakup – at least until Finn can be proven right. Some hot drama’s brewing, so stick with GH and don’t forget to stop by CDL often for updates.