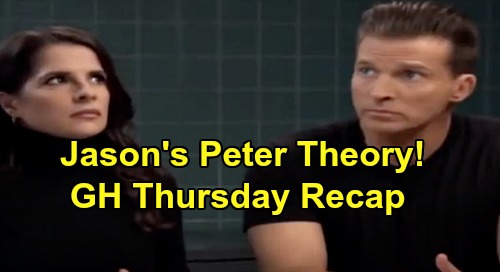 General Hospital (GH) spoilers recap for Thursday, January 9, reveal that Sam McCall (Kelly Monaco) and Jason Morgan (Steve Burton) stood by while Diane Miller (Carolyn Hennesy) argued that Sam needed a new parole officer. Robert didn’t go for it, but finally Sam said it would be a trade, and Jason said that they could give him Peter August (Wes Ramsey). That immediately interested Robert.

Jason then explained Peter’s connection to Shiloh Archer (Coby Ryan McLaughlin) and the theory that Peter hired the gunman to take out Andre Maddox (Anthony Washington) and Franco Baldwin (Roger Howarth) in the OR.

Robert believed it, and he said they needed to bring hard evidence of their theory, then he’ll deal with Sam’s problem.

Later, Maxie confronted Nina about not confiding in her, and she said that it made her feel like her feelings didn’t matter. Nina reassured Maxie that she means the world to her, and also remarked that she was back so Maxie could now take a breather at work. Maxie seemed unsettled by all of this.

At Anna Devane’s (Finola Hughes) place, she lamented to Hamilton Finn (Michael Easton) about how she’s covering for Peter. Finn left as Peter arrived for a meeting with Anna.

Anna presented Peter with the file she found showing that he and the OR gunman worked at the same facility. Peter deflected and ultimately couldn’t be of help.

Peter then stated that he wanted to put the past behind him, and Anna agreed that she wanted the same. She said that she didn’t think it was pertinent to point out his connection with the gunman, and he was thankful. He said that he never wanted to be Henrik Faison again.

At GH, Michael Corinthos (Chad Duell) arrived with Wiley Cooper-Jones (Theo and Erik Olson) to see Brad Cooper (Parry Shen). Turns out, the daycare couldn’t get hold of Brad and so they called Michael because Wiley was fussy.

Michael noted that Brad seemed distracted and suggested a nanny to help out, which he offered to pay for. Brad agreed with some reluctance.

In Finn’s office, Jax arrived and Finn immediately asked if Hayden Barnes (Rebecca Budig) was involved in the Nikolas Cassadine (Marcus Coloma) situation. Jax confirmed and told him about Nikolas having Hayden attacked and making her think that Valentin did it.

Finn wasn’t amused, and Jax promised to do everything he could to bring Hayden home.

In the Corinthos kitchen, Carly Corinthos (Laura Wright) had some questions for Sonny Corinthos (Maurice Benard) about the Alzheimer’s study that he wants Mike Corbin (Max Gail) enrolled in.

Carly was skeptical, and as they talked, she mentioned that Michael would be coming by later to talk about Brad and Wiley. That reminded Sonny about something and he took off hurriedly.

Michael then arrived and he told Carly that he’s concerned about Wiley because of Brad’s distraction. They discussed Michael’s offer to get Brad a nanny, and Carly informed Michael about how Sonny wants to get Mike in the study. They lamented about how Sonny is handling Mike’s decline.

Finally, Ava Jerome (Maura West) caught up with Julian Jerome (William deVry) at Charlie’s Pub. She revealed her wedding ring and updated Julian about her marriage and revenge plan against Nikolas. After a while, Brad called Julian to complain about Michael’s nanny offer, but Julian thought it was a good idea.

On her way out of the pub, Ava bumped into Sonny and informed him about being the new Mrs. Nikolas Cassadine, which left Sonny incredulous. Sonny stated that if Avery Corinthos (Ava and Grace Scarola) gets hurt or if Ava gets murdered, he’ll be unhappy.

Afterwards, Sonny walked into the pub and told Julian that Carly saw him on the pier the other night and that he’s aware of the conversation that Julian had with Brad afterwards.