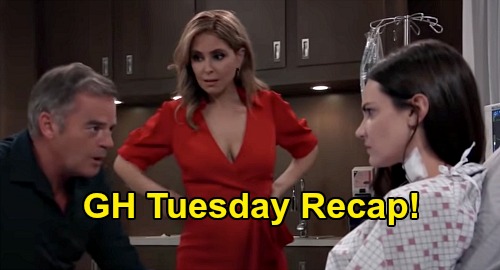 General Hospital (GH) spoilers recap for Tuesday, September 1, reveal that Jason Morgan (Steve Burton) visited with Michael Corinthos (Chad Duell) and Willow Corinthos (Katelyn MacMullen) at the Quartermaine mansion. While Jason stepped out for a moment, Willow and Michael agreed to talk about their kiss later.

When Willow went to check on Wiley Quartermaine Corinthos (Erik and Theo Olson), Jason and Michael caught up on all the drama with Nelle Benson Jerome (Chloe Lanier).

Michael also revealed his kiss with Willow, and Jason urged Michael to be honest about his feelings with Willow. Jason took off, and Michael listened to the baby monitor from the living room while Willow talked with Wiley upstairs.

Willow told Wiley that the kiss felt like the most natural thing in the world, and that she and Michael loved him very much. Willow returned, and she and Michael took off to go visit Brook Lynn Quartermaine (Briana Lane) at GH.

At Turning Woods, Sonny Corinthos (Maurice Benard) sat with Mike Corbin (Max Gail). Felix DuBois (Marc Samuel) was on hand, too, and Sonny told Felix that he respected his dad’s wishes if he wanted to go.

Mike briefly came out of his catatonic state, and Sonny told Mike he was there. Later, Sonny read to Mike from the newspaper about the horse races, and Mike was responsive. Felix came in, and Mike said, “Ponies.”

Sonny asked whether he could take Mike to the races today, and Felix smiled. Sonny asked Mike if he’d like that, and Mike gestured that he needed a shave. Sonny said that he could make that happen.

Meanwhile, at the Corinthos house, Carly Corinthos (Laura Wright) had a nightmare about Nelle surviving and haunting her. Later, Jasper “Jax” Jacks (Ingo Rademacher) stopped by to see how Carly was doing.

Carly recounted her nightmare and she confirmed that she hadn’t told Sonny about Nelle’s death yet. Carly said that Sonny was with Mike and she didn’t want him wasting time on Nelle.

Carly worried that perhaps Nelle survived the fall, but Jax thought that nobody could survive that drop. Carly fired back that they didn’t see Nelle’s body, either.

Soon, Carly got a text from Sonny to bring something to Turning Woods, and Jax again asked if Carly was going to tell Sonny about what really happened with Nelle. Carly said no, that she wouldn’t intrude on Sonny’s time with Mike.

Back at Turning Woods, Sonny gave Mike a shave. Mike thoroughly enjoyed every moment and he spoke to Sonny as Sonny talked about how Mike taught him to properly shave.

Afterwards, Mike was in his wheelchair when Carly arrived with a present. Carly learned that Sonny and Mike were going to the track, and Carly asked if she could go. Mike took Carly’s hand and smiled.

A short while later, Mike was wearing a spiffy hat, which was the present from Carly. Jason arrived and learned about the outing to the track but declined to go. Mike was happy and smiling as he, Carly, and Sonny left to go to the track.

At the Metro Court, Nina Reeves (Cynthia Watros) met with Jax’s jeweler friend. The jeweler explained that she discovered a set of initials on the clasp of the chain to Nina’s pendant, and that she was able to trace it to an artisan in Manhattan. The jeweler gave Nina the artisan’s contact information, and Nina was hopeful.

Later, Jax arrived, and Carly relayed the jeweler’s information. Jax offered to go with Nina to the Manhattan artisan, then Nina asked how Carly was doing. Nina hoped that Carly would be able to get past all of this. Nina thought that Nelle would probably be back. Jax said he wasn’t so sure.

At the hospital, Ned Quartermaine (Wally Kurth) and Olivia Quartermaine (Lisa LoCicero) visited Brook Lynn, who was upset and didn’t want to see Ned. Brook Lynn communicated with a tablet, and she wrote scathing messages to Ned as he tried to apologize.

Brook Lynn wrote that it was too late, and that Ned had disowned her. Olivia attempted to defend Ned, which didn’t really help matters any.

Once Ned and Brook Lynn were alone, Ned again tried to apologize and asked Brook Lynn to come home and accept help to recover. Brook Lynn indicated that she would recover without Ned’s help, and she shooed Ned away.

At Alexis Davis’ (Nancy Lee Grahn) house, Sam McCall (Kelly Monaco) arrived right as Alexis discovered that Neil Byrne (Joe Flanigan) was dead. Alexis went downstairs to call the paramedics, but Sam came down the stairs and looked at her mom sadly, and Alexis knew that Neil was gone.

Later, the medical examiner’s office took Neil’s body away, and Valerie Spencer (Paulina Bugembe) asked Alexis a few questions about what had happened. Alexis was understandably testy, and Valerie said that the paramedics thought that Neil probably had a heart attack.

Valerie left, and Sam comforted her mother, who was beside herself with grief.

Alexis lamented about how she had finally found a good man who didn’t lie to her and treated her with respect. Alexis went on, and Sam didn’t know what to say, so she simply held her mom and let her get her feelings out.

After a while, Sam and Alexis went back upstairs and Alexis found Neil’s wallet by the bed. When Alexis opened the wallet, she found a ticket stub to Aida – Neil had kept the momento from their date. Alexis collapsed in Sam’s arms.

That was a terrific episode of GH, and there’s plenty more coming this week, so stay tuned! Stick with the ABC soap and don’t forget to check CDL often for the latest General Hospital spoilers, updates, and daily episode recaps. We’ve got you covered with all the soaps!

Nina gets a clue about her son or daughter. @watroswatros @GeneralHospital #GH