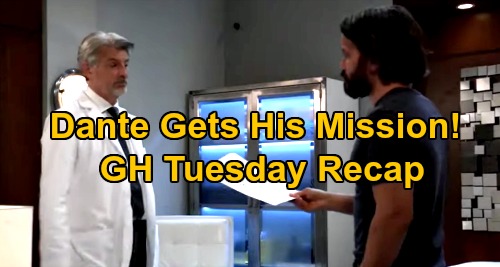 General Hospital (GH) spoilers recap for Tuesday, September 22, reveal that Dante Falconeri (Dominick Zamprogna) talked with Dr. Kirk (Christopher Cousins) at the WSB facility in Geneva. Dante was eager to get out of the facility, but Dr. Kirk said that the offer to release Dante had been rescinded.

Dante got agitated, as he assumed that Dr. Kirk himself had blocked his release. Dante ranted and lashed out, but he refused to get physical or hurt Dr. Kirk.

Dr. Kirk then revealed that this had been an exercise to see if Dante could handle the mission without being a danger to anyone. Dr. Kirk said that if Dante can stand to face his family back in Port Charles, then he was free to go home.

After giving Dante some medication, Dr. Kirk gave Dante a file with his mission included within.

Dr. Kirk then went to another room, where he talked with someone who viewers couldn’t see. “It’s done,” Dr. Kirk told the person. “Dante’s going home in spite of my strong misgivings.”

Dr. Kirk continued saying: “He thinks he’s in control, but he’s dangerously close to the edge and could snap. I know, I have no choice. If you say it has to happen, it has to happen.”

After Sam left, Maxie started quizzing Brando about whether he had kids, a significant other, and whether he wanted kids. Nosey Maxie kept pressing, but Brando stayed mum about most of his life details.

At Kelly’s, Elizabeth Baldwin (Rebecca Herbst) and Lulu Spencer (Emme Rylan) had coffee and talked about Cyrus Renault (Jeff Kober) and his hold over the hospital.

As they were talking about Nikolas Cassadine (Marcus Coloma) and his disastrous marriage to Ava Jerome Cassadine (Maura West), Nikolas walked in. Elizabeth quickly got up to leave, and then talk between Lulu and Nikolas turned to Ava.

Lulu thought that Nikolas would be much better off cutting Ava loose and losing his fortune than continuing on with the marriage and losing his soul. Nikolas then started talking about Ava’s good qualities and vulnerability, and Lulu said that it sounded like Nikolas was falling for his wife.

Nikolas’ phone dinged, and he received a text from someone saying, “I know what you did,” along with a picture of himself kissing Elizabeth.

Outside Kelly’s, Molly Lansing-Davis (Haley Pullos) and TJ Ashford (Tajh Bellow) talked about how they needed a new venue for their wedding, since Neil Byrne (Joe Flanigan) had died at Alexis Davis’ (Nancy Lee Grahn) house.

At the hospital, Franco Baldwin (Roger Howarth) talked briefly with Cameron Webber (William Lipton) about getting a tux for homecoming, and Franco learned that Cameron was going to homecoming as a group with his friends.

Cameron said that he and Trina Robinson (Sydney Mikayla) had decided that they were better off as friends, but he thought maybe they should try dating. Franco suggested that Cameron tell Trina how he feels.

Cameron took off for Kelly’s where he met with Trina. Cameron was about to tell Trina about wanting to date her when Josslyn Jacks (Eden McCoy) came along and interrupted.

At the Metro Court, Nina Reeves (Cynthia Watros) and Ava had breakfast, and Ava spilled that Nikolas followed her to the cabin and that they made love. As Ava was gushing about all of Nikolas’ good qualities, Nina wondered what it meant for her marriage to Nikolas.

Just then, Franco arrived and asked Nina about borrowing a tux for Cameron from Crimson, and Nina obliged.

Once Franco walked off, Ava spilled to Nina that she and Franco had kissed, and after more talk about Nikolas, Nina started to realize that Ava seemed to be falling for Nikolas. Ava’s phone dinged, and she got a text saying, “I know what you did,” along with a picture of her and Franco kissing.

At Alexis’ house, Alexis tried to get in the front door but had difficulty due to her cast, and due to the fact that she got an alert about Neil’s memorial service later that day.

Valentin Cassadine (James Patrick Stuart) came along and helped a frustrated Alexis in the door, then had tea with her and asked her about Neil. Alexis described Neil as a wonderful man, and she noted that they were planning a future when he died.

Soon, Sam arrived and was irritated to find Valentin with Alexis. Sam tried to help her mom as she learned about Alexis’ Osteoporosis diagnosis, but she only seemed to get Alexis worked up.

Alexis made Sam leave, then she asked Valentin if she could use his car and driver to go to Neil’s memorial service. Alexis said that she’d like to let Neil go and start living her life.

There’s definitely a lot going on right now on General Hospital, so stay tuned! We’ll give you updates as GH news comes in. Stick with the ABC soap and don’t forget to check CDL frequently for the latest General Hospital spoilers, news, and daily episode recaps.