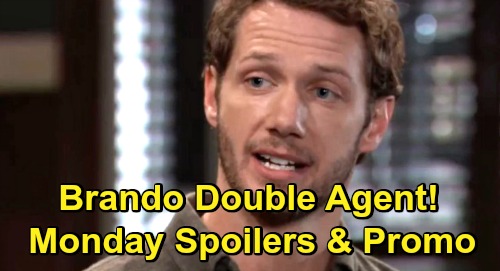 It’s been hard for Trina to enjoy the homecoming dance since she’s still grieving the loss of her father, Marcus Taggert (Real Andrews).

Portia will acknowledge that they knew this night would be tough. This is just a school party, so no one would think less of Trina if she wanted to go home. Portia will ask if Trina talked to her friends, so Trina will admit she sort of talked to “Dev Corbin” aka Dev Cerci (Ashton Arbab).

It turns out Dev will spot Cam and Joss making out, so he’ll be disheartened. As if Josslyn’s’ awkward rejection wasn’t bad enough, now Dev will have to watch the girl he’s crushing on kiss someone else.

After a moment, Dev will pipe up and apologize. When Dev asks if he interrupted something, Cameron and Josslyn will look at each other nervously. It probably won’t be long until Trina appears and makes this situation even more uncomfortable.

Although Cam obviously likes Joss and thinks she’s a special gal, he’s grown closer to Trina over the last few months. Cameron’s heart seems to be leaning in Trina’s direction despite this kiss with Joss.

Nevertheless, Cam will remain torn and leave Josslyn determined to swing things back in her direction before the week’s over. Sadly, that plan won’t work out as well as Josslyn hopes!

Until then, let’s discuss Ryan Chamberlain’s (Jon Lindstrom) collect call to Ava Jerome Cassadine (Maura West). As Julian Jerome (William deVry) and Nikolas Cassadine (Marcus Coloma) looked on, Ava learned Ryan was trying to get in touch with her from Pentonville.

Ryan will just keep calling if Ava doesn’t answer, so she might as well accept the charges and see what Ryan’s up to this time. Of course, GH fans know exactly what this about.

Ryan recently received a special delivery from Nelle Benson Jerome (Chloe Lanier): a letter that spells out all Julian’s wrongdoings and could leave him dead as a doornail if Sonny Corinthos (Maurice Benard) sees it.

This call is undoubtedly the start of a blackmail plot, so it’ll be interesting to see how this goes down. Julian can be pretty protective of his sister when he wants to be, so he may tell Ava to just give him the phone and let him handle Ryan.

Perhaps Julian will warn Ryan not to contact Ava again or else!

However, it’s Ryan who’s holding all the cards here – and he’ll be sure to make his leverage known. Ryan may allude to the dirt-filled letter and set up a meeting with Ava or even Nikolas.

You can bet Ryan’s ultimate goal will be escaping, so he may propose Ava and that dark prince of hers will make it happen or else Julian’s a goner.

Next, Sonny will listen to Jason Morgan’s (Steve Burton) new plot and weigh in on whether it might work. Jason and Sam McCall (Kelly Monaco) have been fretting over Cyrus Renault’s (Jeff Kober) attempt to push boundaries.

Cyrus made a deal with Sonny, but he’s been testing limits and seeing just how much he can get by with.

Jason will hope his plan can put Cyrus in his place or perhaps get this takedown show on the road.

Since Cyrus is sniffing around Brando Corbin (Johnny Wactor) as a possible team member, Jason may think they should let Cyrus believe he’s won Brando over.

In reality, Brando could still be on Jason and Sonny’s side, a true double agent.

Sonny might have some reservations about that since it’d put Brando’s life in grave danger. Cyrus isn’t the kind of guy who tolerates betrayals, so Brando might be a dead man if Cyrus found out what he was really up to.

Naturally, there’s also the possibility that Cyrus will be ahead of the game and blackmail Brando into doing his bidding – perhaps by threatening Dev and other people Brando cares about.

If GH wants to make this really messy, they could let Brando work for Cyrus while letting Sonny believe he’s still working for him! Regardless, trouble’s probably brewing for Brando any way you slice it. No matter what Jason’s scheme involves, Brando’s bound to get caught in the crossfire.

Other General Hospital spoilers say Curtis Ashford (Donnell Turner) will confide in Stella Henry (Vernee Watson) as they share a meal together. Stella may end up calling Curtis out on something that’s bothering him.

This would be a good time for Curtis to open up about his fears about Jordan Ashford (Briana Nicole Henry) and her secret-keeping.

Speaking of secret-keeping, Molly Lansing-Davis (Haley Pullos) will keep her hot hookup with Brando under wraps – all while pushing TJ Ashford (Tajh Bellow) to make their future a priority.

TJ’s all about protesting Cyrus and his shady tactics, but Molly may express concern about the danger and suggest their life together matters more.

TJ may dial down his Cyrus rage somewhat and go along with Molly’s wishes since they’ve got a commitment ceremony to plan. That’s supposed to be a way of celebrating their domestic partnership, but it may wind up being where the one-night stand bomb will drop!

Can Portia help Trina get through Homecoming? Click to watch a sneak peek of tomorrow’s all-new #GH – RIGHT NOW! https://t.co/zgQhcxVKSd