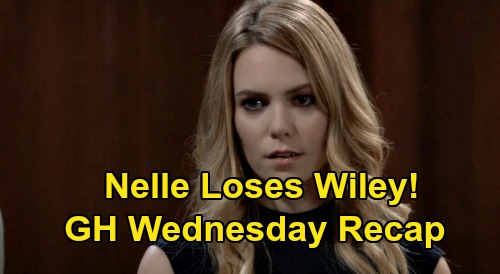 General Hospital (GH) spoilers recap for Wednesday, August 12, reveal that Sonny Corinthos (Maurice Benard) arrived at GH in Mike Corbin’s (Max Gail) room. Mike gestured for Sonny to come over and he said that he was ready to go home.

Felix DuBois (Marc Samuel) walked in and apologized for interrupting, then said that he thought Mike was asking to back to where he feels at home – Turning Woods. Felix agreed to make the arrangements.

In Jason Morgan’s (Steve Burton) room, Sam McCall (Lindsay Hartley) wanted to get the doctor immediately, but Jason wanted to know how long he’d been at the hospital and what happened. Sam explained that he had been in a motorcycle crash.

After the doctor was done examining Jason, Sam explained that he had exploratory surgery due to a possible traumatic brain injury. Jason couldn’t remember the accident.

Soon, Jason remembered that Sam wasn’t supposed to be there with him, and off-screen Sam told Jason about the whole story with Delores Maloney (Andi Chapman) and her new parole officer.

Sam said that she reached out to Valentin Cassadine (James Patrick Stuart) for help, and she explained all the details of the exchange. “How could you reach out to Valentin?” Jason asked.

At the Quartermaine mansion, Ned Quartermaine (Wally Kurth) asked Lucy Coe (Lynn Herring) for her tie breaking vote on the matter of whether ELQ should fund GH.

Valentin cryptically noted that Lucy knew exactly what was at stake here, and Lucy begrudgingly voted in Valentin’s favor not to fund the hospital. Lucy stammered that Cyrus Renault (Jeff Kober) could fund GH, and Ned bellowed the Cyrus is a drug lord. Lucy said she didn’t know that.

Lucy wanted to leave, but Valentin said there was one more vote – to vote in the new CEO. After the vote, which made Valentin the CEO, Lucy and Valentin took off, and Brook Lynn Quartermaine (Briana Lane) tried to slink out, but Ned caught her.

Ned blasted Brook Lynn for signing over her ELQ shares and not telling him about it. Brook Lynn fired back that Ned wouldn’t help her, so she got help from someone else. Ned yelled that Brook Lynn chose Valentin over her family.

Olivia Quartermaine (Lisa LoCicero) tried to intervene in the shouting match, but Ned wouldn’t back down and he told Brook Lynn to get out. Brook Lynn went upstairs sadly and came back down with a bag. “I’ll send the rest of your things once you get a place,” Ned said coldly, then slammed the door after Brook Lynn.

At Crimson, Nina Reeves (Cynthia Watros) found a note that Nelle Benson Jerome (Chloe Lanier) had left for her telling her she’s a good boss. Nina sighed and crumpled up the note, and Jasper “Jax” Jacks (Ingo Rademacher) walked in and they discussed Nelle a bit.

Jax warned Nina not to let what Nelle said to her make her doubt herself. Nina lamented that she could have been the one person who didn’t betray Nelle.

Soon, talk turned to Nina’s search for her child. Nina mentioned her half-heart necklace and pulled it out of its box. Jax had an idea, and he got on the phone with a jeweler friend of his named Evelyn who might be able to help.

Later, Nina, Jax, and Evelyn sat at a table at the Metro Court. Evelyn examined the pendant and said that she might know the craftsman. Evelyn rushed off.

Across the restaurant, Lucy and Valentin entered, with Lucy blasting Valentin for making her choose between Deception and GH. Valentin mused that he was just a businessman and that Cyrus could rescue GH.

Lucy fumed about how the Quartermaines were going to resent her even more than they already do. Valentin then noticed Nina and Jax at their table and he ushered Lucy over to announce that ELQ had a new CEO – himself.

Jax quickly realized that Lucy was the tiebreaker vote and that Valentin must have something on her. Lucy left flustered, and Nina told Valentin congratulations and that she hoped he finally found what he wanted.

Turns out, Nelle had finagled to get the hearing closed, so Carly Corinthos (Laura Wright) had to wait in the foyer. Willow joined her for support, so it was just Michael, Diane, and Nelle in the courtroom.

Judge Lowe (Scott Takeda) called court to order and proceeded to give his ruling, noting that there were no “angels” in this courtroom, since both Michael and Nelle had been to prison and served their time.

But then the judge turned to Nelle and blasted her for her selfish and manipulative behavior, and he awarded sole custody to Michael and Willow. Nelle was horrified.

Michael and Diane reconvened with Carly and Willow in the foyer, and Diane said that Nelle got no visitation at all. Back inside the courtroom, Nelle begged the judge to reconsider, but the judge basically told her that she made her own bed and that she could file an appeal for limited visitation at another time.

Nelle rushed out to the foyer and insisted to Michael that she’d always have a part in her son’s life. Willow blasted Nelle, saying she felt sorry for her.

Carly then had a moment with Nelle alone, and the two women traded barbs. Carly said that Nelle didn’t know how to parent, and Nelle blasted Carly for taking her son from her.

Carly fired back that Nelle gave her son away right after he was born and that she did all this. “If you don’t like what’s going on, then that’s too bad,” Carly said, then she walked off. Nelle looked at the tracker on her phone.

Back at GH, Michael and Willow entered Mike’s room to find Sonny there. Sonny heard about the custody ruling, and he was thrilled.

Finally, in Jason’s room, Sam told Jason about how she made a deal with Valentin – a new parole officer in exchange for her kids’ voting proxies until they were 18 years old. Jason was horrified and worried about Valentin getting a foothold at ELQ.

Sam didn’t think that Valentin would do anything to harm the company, but Jason lamented that his grandfather built that company. “The family wants to keep it in the family, and they don’t want Valentin anywhere near it,” Jason said.

That was a great episode of GH, and there’s plenty more coming this week, so stay tuned! Remember, keep CDL at the ready so you don’t miss any of the latest General Hospital spoilers, recaps, or news. We’ve got you covered!