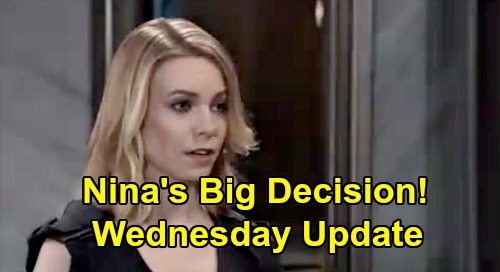 General Hospital (GH) spoilers update for Wednesday, May 6, teases that Mike Corbin (Max Gail) will continue to suffer. Mike’s getting worse every day due to this late stage of Alzheimer’s, but Sonny Corinthos (Maurice Benard) is struggling to let go. At Turning Woods, Sonny will beg Mike to tell him what he needs. Since that’s not something Mike can really do at this point, Sonny will have to guess and do the best he can.

Next, Nelle Benson Archer (Chloe Lanier) will hope she can count on Nina Reeves (Cynthia Watros). General Hospital spoilers say Nelle will ask Nina to speak on her behalf in court.

Although Nina will seem uneasy over the suggestion, Nelle will make a strong case for why her boss should do it. She’ll insist that Nina could make all the difference at the custody hearing, which may be true.

It looks like Nina will decide to help Nelle out, but some curveballs are coming in this story. GH fans can expect some shockers in the courtroom, so it’s possible Nina will betray Nelle in the end.

Regardless, Carly Corinthos (Laura Wright) will fear Nelle could walk away with shared or even sole custody rights. She’ll give Jasper “Jax” Jacks (Ingo Rademacher) updates on her growing concerns in Wednesday’s GH episode.

If Nina can win Nelle over, why not the judge? Carly will worry that Nelle will cry some crocodile tears and sell a judge on her sob story.

There’ll be some awkward moments, but things will take a violent turn thanks to Brook Lynn Quartermaine (Amanda Setton).

Brook Lynn will be in the boxing ring, where she’ll most likely help Michael work through his anger. Unfortunately, Brook Lynn will unleash some anger of her own! She’ll call Sasha a “slut” before whacking her in the face with her boxing glove.

Sasha will be left with an injured nose, which could cause some issues with her modeling gig at Face of Deception.

Other General Hospital spoilers say Michael and Willow Tait (Katelyn MacMullen) will put their problems aside and make Wiley Quartermaine-Corinthos (Erik and Theo Olson) the priority. Although Willow and Michael are dealing with some deep emotional wounds, they’ll concentrate on keeping Wiley happy, healthy and secure.

Wiley’s best chance of staying that way would be if Michael scores full custody – at least that’s how everyone on “Team Michael” feels. General Hospital spoilers say Michael will cap off this week’s episodes with a decision that’ll change his life. It looks like Willow’s poised to become Michael’s bride soon enough!

Until then, we’ll see the aftermath of the showdown between Sam McCall (Kelly Monaco) and Kristina Corinthos-Davis (Lexi Ainsworth). Alexis Davis (Nancy Lee Grahn) will think Sam is owed an apology by her sister. She won’t get why Kristina felt compelled to say such hurtful things to Sam, but she’ll hope they can patch things up.

Molly Lansing-Davis (Haley Pullos) thought Kristina’s comments were uncalled for as well, so she’ll back Alexis up. Of course, it doesn’t matter whether Kristina apologizes or not.

It’ll be tough for Sam to just forgive and forget after Krissy slammed “JaSam” like that. Sam and Kristina will make amends sooner or later, but they may just have to deal with the tension for now.

At The Floating Rib, Robert Scorpio (Tristan Rogers) will order up a pitcher of beer and try to drink away his pain. GH viewers know Robert was heartbroken over the news of Holly Sutton’s (Emma Samms) death.

Robert won’t be coping well in Wednesday’s episode, so Maxie Jones (Kirsten Storms) will try to help with Peter August (Wes Ramsey) by her side.

The sight of Peter alone is enough to get Robert riled, and Robert won’t be looking for support anyway. General Hospital spoilers say Robert will shout at Maxie and Peter. He’ll let “Paxie” know they’re not needed and will push them to leave.

Maxie will hate to see Robert like this, but she won’t have a clue that Peter’s to blame. Holly’s death seems to be the distraction Peter ordered for Robert, but is Holly really gone for good? General Hospital spoilers say things aren’t quite as they seem in this storyline, so stay tuned for more details. CDL’s your hotspot for gripping General Hospital spoilers, updates and news.