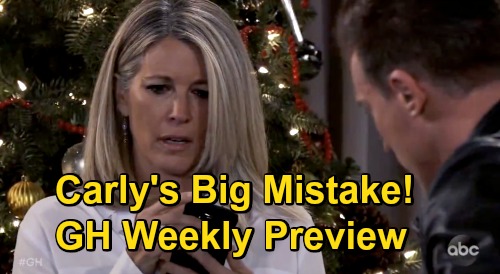 General Hospital (GH) spoilers tease that the last week of 2020 is going to be a big one on the ABC soap. The new GH preview for the week of December 28 is out, and it promises a week of high drama. There’s a lot packed into this fast-moving promo, so let’s get right into it!

First off, there are some brief flashes of Franco Baldwin (Roger Howarth) and Scott Baldwin (Kin Shriner) looking like they’re up to something. Franco appears to be looking out for someone, which could have something to do with Liesl Obrecht’s (Kathleen Gati) return to Port Charles.

As GH viewers know, Liesl wants to fly under the radar, so Scott and Franco might be working to keep her hidden.

The promo also shows an angry-looking Curtis Ashford (Donnell Turner). As GH viewers will remember, at the end of last week, Jordan Ashford (Briana Nicole Henry) had found Curtis in the park, and Curtis was still peeved about her decision to keep Marcus Taggert’s (Asante Jones) survival from him.

We’ll see if Jordan and Curtis can work things out this week.

Next, the action will heat up as Molly Lansing-Davis (Haley Pullos) decides to come clean with TJ Ashford (Tajh Bellow) about her one-night stand with Brando Corbin (Johnny Wactor).

TJ is shown upset, demanding that Molly tell him who she slept with. It’s only a matter of time before Molly confesses that it’s TJ new friend Brando. Yikes!

The new GH preview for December 28 to January 1 also shows a scene at the Corinthos house, as Michael Corinthos (Chad Duell) gets inquisitive and demanding about what’s going on with Sonny Corinthos (Maurice Benard).

Michael demands, “What the hell happened to my Dad?” while Carly Corinthos (Laura Wright) and Jason Morgan (Steve Burton) share a worried look.

Afterwards, Jason and Carly embrace, as Carly’s clearly still worried about where Sonny is and what’s happened to him. Next, the preview switches to an odd scene where it appears that Willow Corinthos (Katelyn MacMullen) and Harrison Chase (Josh Swickard) are happily jumping into a pool with some other people.

This suggests that Willow and Chase will spend some time together, or that one of them may be having a fantasy of being reunited and having some fun together. We’ll see how this shakes out.

The new GH preview also shows Anna Devane (Finola Hughes) and Hamilton Finn (Michael Easton) sharing a conversation in the park – Anna may be counseling Finn on how to handle the situation with his father Gregory Finn (Gregory Harrison) here.

Back with Carly and Jason, they’re shown in another scene in which Carly seems to be assuring Jason that things aren’t going to escalate, but then later Jason is frantically asking Carly what she’s done, suggesting that Carly may take matters into her own hands and do something in retaliation for Sonny where Cyrus Renault (Jeff Kober) is concerned.

Speaking of Cyrus, he’s shown becoming outraged as he’s drinking at the Metro Court bar and knocking his glass off of the bar in anger. This could be related to what Carly has done, or perhaps it will be related to the situation unfolding between Brando and Sasha Gilmore (Sofia Mattson).

Of course, Cyrus could also be upset over something Laura Collins (Genie Francis) does as well, since there’s a lot of drama there, too. Last we saw Cyrus, he was reeling over his mother’s rejection, so that’s a lot of angst to have bottled up – it’s no wonder that Cyrus will have an outburst!

Finally, the new GH preview shows Jackie Templeton (Kim Delaney) back in Port Charles and apparently talking with Laura at the Metro Court. Jackie got filled in from Robert Scorpio (Tristan Rogers) via phone on all the Port Charles goings-on last week, but there will be even more for her to learn.

It looks like Jackie will get updates from Laura about Laura’s connection to Cyrus, which might help with Jackie’s investigation into the drug lord.

It looks like we’re in for a big week, so stay tuned! Remember, CDL is your go-to source for the latest General Hospital spoilers, updates, and news. And check out our daily episode recaps as well!