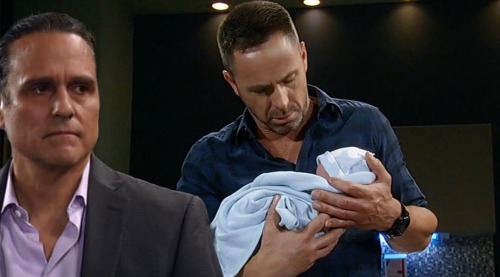 General Hospital (GH) spoilers tease that it’s time to start thinking about the aftermath of the baby swap reveal. GH has been building to this bombshell for what feels like forever. You can bet they’re going to do it up right! Lucas Jones (Ryan Carnes) will have more memory flashes as the revelation rapidly approaches. He’ll struggle to remember exactly what went down just before the crash.

Of course, General Hospital fans know the answer to that. Brad Cooper (Parry Shen) blurted out a shocking confession in the tense moments before the collision. He told Lucas that “Wiley” is actually Michael Corinthos (Chad Duell) and Nelle Benson Archer’s (Chloe Lanier) son.

GH writers gave Lucas some memory loss to delay the shocker a bit longer, but Lucas could face total recall at any moment. That’s certainly something Julian Jerome (William deVry) has been fretting about – and with good reason. Julian is in this just as deep as Brad, so he knows things could get ugly fast.

Although Julian warned Brad that he wasn’t going down with him, that’s not really something Julian can control. After all, Sonny’s already suspicious. Nelle’s set to reveal the truth about “Wiley” during the week of February 17-21, so Julian could have a target on his back soon.

Once this bomb drops, it surely won’t take Sonny long to figure it out. Sonny may have to take a break from tackling his Pentonville enemy, Cyrus Renault (Jeff Kober). He’ll undoubtedly want to deal with Brad, but let’s focus on Julian and the danger he’ll be in.

After all, Brad probably would’ve cracked under the pressure if it hadn’t been for Julian. This secret would’ve been exposed a long time ago if Julian hadn’t been there to keep Brad in line. Not to mention Julian himself kept the secret. He’s just as much to blame for keeping Michael in the dark and robbing him of his child.

Sonny definitely isn’t going to appreciate that when the baby swap news finally spreads. After Sonny gets updates on Julian’s involvement, a takedown plot should be put in motion. General Hospital spoilers point to extreme peril for Julian as this storyline heats up. Sonny’s already riled from all this mob drama, so he may plan to have no mercy!

Will Sonny put out a hit on Julian or even try to take matters into his own hands? Regardless, this will reignite Sonny and Julian’s feud in the coming weeks. Revenge may be Sonny’s priority after this baby switch drama erupts, so Julian had better watch out.

General Hospital spoilers say some thrilling twists and turns are ahead. We’re all looking forward to the big reveal, so don’t miss CDL’s exciting GH updates and news.