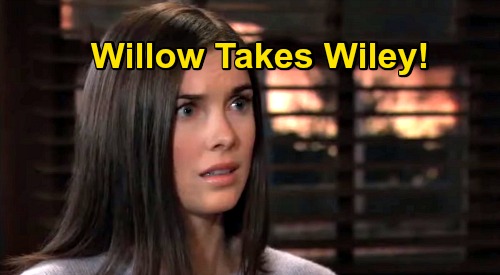 General Hospital (GH) spoilers reveal that Martin Gray (Michael E. Knight) made some interesting points as he went to bat for Nelle Benson Jerome (Chloe Lanier) in court. After Willow Corinthos (Katelyn MacMullen) took the stand, she was forced to explain why she was fired from her previous job at Port Charles Elementary School.

Willow admitted that she faced complaints about inserting herself into her students’ lives and disregarding their parents’ wishes. That led Martin to ask if that’s how Willow intended to raise Wiley Quartermaine-Corinthos (Erik and Theo Olson).

“I mean, what’s to say you don’t wake up one day and decide you know better than the father himself? Tell us, Mrs. Corinthos,” Martin insisted. “Who’s gonna be there to protect Wiley from you?” Of course, Martin was just doing his best to help Nelle score custody rights, but what if it also serves as a hint about the story to come?

General Hospital fans know Willow is a sweet character with a good heart. Willow would certainly never do anything to harm Wiley, but she’s proven that she’ll do whatever it takes to put him first. That includes getting arrested and marrying a man she doesn’t love. Willow’s priority is Wiley – not Michael.

That could be important since Willow may not quite understand just how dark things can get in the Corinthos world. The truth is Wiley is part of a mob family. There’s always going to be deadly danger swirling all around this kid. Is that much different that life in a cult or even life with Nelle?

What if Martin’s prediction actually comes true? There could easily come a point when Willow and Michael clash over what’s best for Wiley. Willow would absolutely go against Michael’s wishes for Wiley if she didn’t agree with them. They may be on the same page right now, but that may not be the case forever.

Willow could end up thinking Wiley needs to be protected from the violence associated with Grandpa Sonny Corinthos’ (Maurice Benard). The peril’s bound to rev up as this Cyrus Renault (Jeff Kober) drama continues. Michael may not think it’s necessary to do something as drastic as cut Sonny out of the picture, but Willow might disagree.

This marriage happened awfully quick, so it doesn’t seem like there was time for a prenuptial agreement either. Michael would be begging for trouble with any other woman, but so we have to consider the potential for trouble with Willow, too.

Willow and Michael may be poised to fall in love soon, but GH could blow up this marriage and spark another Wiley battle through the mob angle.