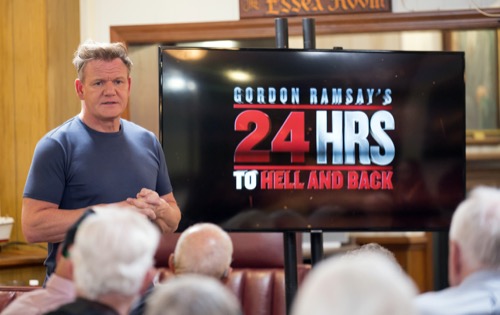 Ramsay will try to bring this failing restaurant back from the brink of disaster – all in just 24 hours. As the clock ticks down, Ramsay and his team transform this restaurant with a spectacular renovation, a fresh new menu, and hope for the future.”

Gordon Ramsay’s 24 Hrs to Hell and Back begins tonight taking his “Hell on Wheels” to Virginia, the best fishing spot in the area to Lowery’s Seafood Restaurant, one brother is the owner and the other is the manager., open in since 1938. The owner, Duby is 50. The restaurant was opened by his grandparents 82 years earlier. David, 47 is the brother, purchasing manager as Duby was given ownership and he is considered the glorified gopher.

Anthony is the line cook. Pam has been there 28 years and Arlene has been there for 43 years, both commenting on how well the place used to be until about 10 years ago; blaming the issues on how Duby is slacking on being the boss and both brothers won’t come together to run the place; both feel it is frustrating trying to communicate with each other. The morale is not there, they love each other but are at each other’s throat when they are around each other. The family fights drive each other away; neither know how much their parents have put into the business but Sharon and Wayne invested too much, feeling they would have to sell their house if they invest any more; only hoping for a miracle. The staff is emotional about the possibility of the place closing.

Chef Gordon Ramsay wants to know why the public is staying away from the restaurant and decides to go undercover with a group of senior citizens to see what the issue is with the restaurant and the local seafood dishes; hoping for an eye-opening situation. Horrible décor, and the strong fishy smell. Henry the line cook wants them to smell the food but is told to cook one up to see how it turns out. Everyone orders dishes that should have been perfected after 82 years.

The beef is far too chewy, telling everyone not to eat as they are sour oysters. The crab cakes have shells in them and are spoiled, second and third grade. He stands up and orders all the customers to stop eating. He asks for all the staff to come outside and turn everything off in the kitchen, revealing that he is actually Chef Gordon Ramsay, saying they just had a dreadful experience. He asks them all to take a close look at what his staff has discovered in their past several day’s surveillance.

They see the filthy kitchen, low-quality food, expired food, 6 or 7 people get sick from the food and he wants to know why they have given up; staff blaming it on Duby. Customers blame it on the staff and prior consequences. Gordon apologizes, asking them to give him 24 hours and for them to return in 24 hours. He tells the staff to say “goodbye” to home for the next 24 hours as they are there as much in this as he is, and they do. The clock begins as he sends David and Duby into the kitchen to clean up as he speaks to the staff.

The leadership is to blame. Duby is blamed for never being there, his passion is gone. David buys supplies every day, no supplier and no money. Gordon finds out that no one gets paid, they cannot cash their checks and he feels their pain. He brings in the brothers to confront them, saying the place is in shambles. He demands to know how they can call this “passion.” 18 plus years and tells him he should get the hell out of there, as Anthony calls him cray for his attitude. Gordon tells him to “piss off!” he demands him to stop playing the victim and to show some balls, and as he is 50 and time to turn the corner. After 30 years he should know what is going wrong in his parents’ business.

Gordon asks David, who admits he can’t fight Duby about this anymore, as he doesn’t respond to him anymore, as they always argue about the inventory. Duby says this is not about inventory; but Gordon says this is about the passion being gone and this is like the Titanic being gone; get their heads out of their ass and it will take so much work to get this place turned around; everyone agrees to help them get their place back on the map. The Ramsay Team arrives and they are going to begin working on renovation the dining area as Gordon takes the owners into the kitchen.

He asks about the last time the kitchen has ever been cleaned, Anthony and Henry admit it has never been cleaned. He opens the fridge and there is black mold inside. No dates on anything, raw chicken is stored with fried chicken. 9 containers with fried chicken and they are losing at least a few thousand dollars on chicken alone, wondering why the staff cannot be paid. He spots the oysters they were served and how bad they were; shaming all of the men in the kitchen. He learns there is another fridge in the kitchen, squishing the rotten apples; Gordon throws one on David as he says he bought them for the staff to eat, swearing they don’t serve them.

22 hours 11 minutes
Gordon is done with all the excuses, demanding the place be cleaned from top to bottom. Everyone on the staff works hard as Ramsay, checks with his worker Theresa who explains how they are giving the restaurant a Nautical feel. With the renovations off to a good start, he takes out David, Anthony, Chuck, and Henry out to the Hells on Wheels Kitchen so they can learn the new menu for Lowerys. Anthony has been working for the restaurant for 33 years. Gordon takes the time showing them exactly how to make each dish. Mary is going to show them, making Anthony the head Chef, hesitant but ready to do it!

15 hours and 20 minutes
Chef Gordon Ramsay sits with Duby asking him what is preventing him. He says the kitchen clean up is his brother’s job and David doesn’t seem to want to accept the responsibility. It turns into an argument and his brother doesn’t want to listen to him; admitting that nothing meant more to him than his dad. He is embarrassed by this. Ramsay feels there is a lot of deep issues in this place and it has been fractured for decades if he cannot fix this then this place is going to disappear.

15 hours 12 minutes
Everyone is exhausted, but everything is coming together, hoping this is going to make Lowery’s change. Gordon calls David over so they can chat together at the bar. He admits that Duby says things that get on his last nerve and says he is trying desperately not to let things get that far. He admits that a week prior he picked up his 6-year chip for being sober, which Gordon congratulates him; but he feels unless the two of them get on the same page, this will not succeed. This is going to take a lot of commitment from both of them and putting their ego aside. He feels they need to help their parents now and no longer depend on them. David feels he has slain bigger demons than this and there is hope!

Gordon checks on Mary in the kitchen and Anthony feels he can do this as he reminds Chuck that he can also do this. Mary speaks with Gordon, saying they have improved a lot, but they have a lot of work on their hands still and need a lot of help. Chuck is the standout and picked everything up very quickly. Anthony is called over, asked if there is a way to pick things up quickly and takes him on a jog; Gordon making him run… telling him to run and teasing him that he needs to start slowly but pick up space.

Gordon brings up David and Duby’s mother, who tells her sons that she needs them working together, as it is the only way; they cannot butt heads and need to talk it out as it is important to keep up this legacy if there is no change in 6 months it will be taken from them. This legacy is very important to their daddy. Duby agrees and says the big picture is back in his head as David feels they can get it done and shake hands. They both agree to move forward with their mother, and want to have good times and happy times; Gordon hopes all their words are the truth.

Gordon excuses himself to the kitchen, checking on the dishes to test how everything is turning out. He returns to the dining room as the staff all notice the difference. He notices that the chicken Anthony produces is raw and there is 15 minutes and 37 seconds left until launching. Everything else is delicious! He encourages Anthony not to let it get to his head and he can do this as they are about to open.

Duby tells the team that he and David are together and moving forward, they are committed to the staff, thanking them for being there through the turmoil and they are going to show them why they stuck around; reestablishing it tonight. The countdown is on, as customers begin to shuffle in; impressed with how happy the staff is and how beautiful the décor is.

The reopening begins as Chef Gordon Ramsay reminds everyone in the kitchen to communicate and it seems Lowerys has turned a corner with the customers, old and new. Unfortunately, ice-cold chicken is served and Anthony walks out of the kitchen, saying he cannot do this and it is “just too much.” Both David and Gordon chase after him as he admits he is too overwhelmed, but they find a solution, Chuck taking over the chicken. Anthony messes up the fish and says he is done again. Chuck says he has this and takes over the kitchen, being able to take control. Gordon checks on Sharon and William, who thoroughly enjoy their meal.

It seems everyone in the dining room is enjoying their food and Chuck is running the kitchen no problem, bringing everything on top. The food is fantastic and delicious. David and Duby feel good about the restaurant and feel they are making their parents proud. Chef Gordon Ramsay makes his gracious exit.

3 Months later
Duby tells Ramsay that everything is going in the right direction. There are new faces in the restaurant who love the place and food, who have never been there before. Arlene thanks him. David is doing a wonderful job in the kitchen. Chuck stepped up as Anthony left them, food looks better and everything is doing well. They are looking forward to the 6-month deadline and Duby has an apple for Gordon! LOL