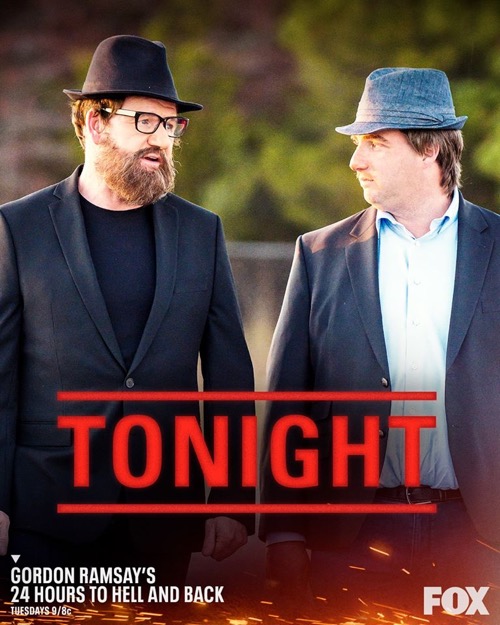 “The Sopranos” alums Joey Gannascoli and Vincent Pastore, Chef Ramsay and his crew find a passionate, but inexperienced team, whose lack of respect for each other makes it difficult to work together.”

Gordon Ramsay’s 24 Hrs to Hell & Back begins with the “Hells on Wheels” traveling to Tom’s River, New Jersey to visit Caneda’s White Rooster. It has only been open for a year, owned by Patty who took all her grandmother’s Cuban recipes to create the restaurant. Phil, 26 is the Executive chef. Jenn 42 is a server who says the problem is Patty hires very young people with no experience and it becomes a free for all. Lizzie is Patty’s younger daughter. Her investor and business partner, Jeremy feels Patty needs to turn things around and cannot keep putting money into it as he is in for over 2 million dollars. Chef Gordon Ramsay meets with Jeremy and they decide they are going in disguise.

Before they even enter, no one says the restaurant even looks Cuban. All eyes are on celebrities Vincent and Joseph from the HBO series “Sopranos” The kitchen has a very fishy smell, that everyone can smell. They order classic Cuban dishes that should be easy to create. 55 minutes into the order one item has not even begun to be made.

Gordon tells them to stop eating the octopus as it is putrid. The salmon is burnt to hell. Gordon has seen enough and wants everyone out of the kitchen as he stands up and goes into the kitchen, ordering them to turn everything off and join him in the dining room, calling his experience an “embarrassment.” He apologizes to the customers, not one able to raise their hands from a great eating experience. They all walk out to Hell on wheels where he shows what his crew has been filing within in the restaurant the past little while.

He presents them videos of the unwrapped, spoiled, raw chicken. Flies on the food. Filthy kitchen. Rotten fruits and vegetables. Staff always on their phones. The crowd is rumbling as Gordon says it is unbelievable. He then confronts Phil who was prep cook to executive chef. Jeremy feels this is unacceptable as Gordon knows this is tough asking him for 24 hours to turn this around, promising to give them that one last chance. All staff is ordered to call home and told they are not coming home for the next 24 hours.

Phil admits that he sees Patty only 3 times a week, but she swears she is completely present. Gordon says she can talk the talk but its about results. No one sees her as a boss and the place is a shit show every night. Patty is questioned as to whether she is over her head on this. Gordon says they can have a pity party or have a hard look from within and right now he isn’t looking very inspired. He brings in his team with Theresa to begin the renovations. 23:09 minutes to go.

22:11
Gordon goes into the kitchen with the staff to inspect it. He finds nothing good about the kitchen, including finding octopus that makes him vomit from the rotten smell. He calls Phil a disgusting man, telling him to man up a little bit and take some responsibility and demands that they all clean up the restaurant immediately.

20:48
Gordon gets an update on the renovations for the dining room, including textures and the bar before he steps out to Hell on Wheels where he turns his attention to Phil to see if he is really entitled to his title. He gives him a pep talk about being that high up and a very lonely position. He presents him with the new menu he has created for the restaurant; training him on each dish.
17:33
Patty is complaining that Phil is not the one leading his kitchen and it isn’t her job; she feels she is just too motherly to everyone and is overwhelmed. She is told Gordon Ramsay has to help and things will change.

Patty comes out to the dining area and says she hates the color yellow; something she shares with Gordon who asks for spends some time with her. She shares this is a lot of change all at once. He reminds her how angry Jeremy was feeling. He feels she can blame him all she wants but it is her name on the door. He wants to know where the woman who had the drive at the beginning and she doesn’t know how to answer. Her biggest fear is from 11 years ago when her husband walked away with nothing and it took her 4 years to open that little shop and she doesn’t want to do that again. She doesn’t want to keep starting over again. He feels her defense walls need to come down and she needs to become the boss. She believes she can.

4:13
Gordon Ramsay needs to check on Phil and his team and if he is capable of executing for his team. Mary says they definitely need the practice, although Phil is for sure a leader. Her concern is them being able to keep up with the menu and temperatures. Patty wants to know if she would keep Phil on as the executive chef if she owned the place.

She suggests not to give up on him yet but to give him the chance today, Jeremy is the biggest concern and keeping the place open.

Inside the restaurant, everything is coming together and now Patty loves the color of the restaurant and Phil and the kitchen team is excited to see all the new equipment in the kitchen supplied by Gordon Ramsay himself. With 90 seconds to go, Patty thanks everyone for the 24 more powerful, emotional hours and are a very important part of her life and without them, none of this could happen.

The relaunch begins and quickly fills up. Jeremy returns in disguise to see if things have truly changed. He feels his starters are a good start and delicious. There seems to be a problem with all the snappers, entrees are being backed up because the fish are being wrapped up. Ramsay tells them it feels like the kitchen has switched off and doesn’t care anymore.

Patty goes into the kitchen and tries to get things organized but no one gives her real answers. Jeremy feels the ambiance is the only thing that improved. Gordon sends Patty onto the patio to speak to someone, who turns out to be Jeremy. He lists all his issues, saying he will give her 90 days and they will revisit it as he feels they are still in hell at this point. Gordon says he too would invest in Patty reminding the two of them to stick together in this business as they have something very exciting. Jeremy feels infinitely better about Patty but confident they can move forward. If she wants this to survive she needs to make the decisions.

3 months later…
Patty reveals they are getting a lot of excited feedback about the casual menu. As a leader, she has definitely made the important chances necessary and Phil is no longer with them, they have Lisa who is a great chef who is crushing it. Its been nothing but a positive experience for them.