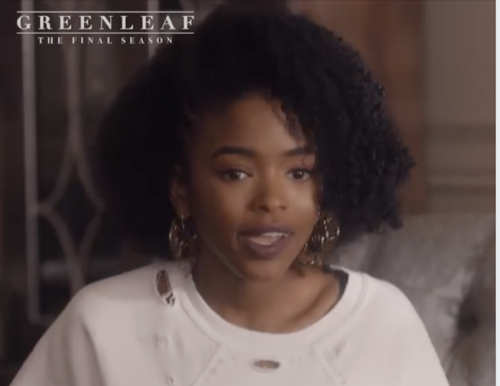 Tonight on the OWN their new series following the Greenleaf family called Greenleaf with an all-new Tuesday, June 30, 2020, season 5 episode 2 and we have your Greenleaf recap below. In tonight’s episode called, “The Second Day,”  season 5 episode 2 as per the OWN synopsis, “Bishop and Lady Mae take a walk through their history when they visit Mavis’s club as a potential venue. Jacob uncovers a shocking revelation about the history of the Greenleaf family home.”

Grace meets with the doctor. AJ is stable. The doctor tells her to go home and rest. AJ needs support and it will be a while.

James is trying to get Mae to eat. She is distraught over AJ. Grace arrives home. She tells them about AJ and how Noah is on his way into town. Charity shows up. Grace is cold. Mae defends her, yelling at Charity. She did get AJ in trouble and give away their church. James tries to calm Mae down after Charity leaves. He just wants to know when they will marry.

Kerissa and Zora fold clothes. They talk about her friends. Meanwhile, Darius calls Grace about what he has learned. They make plans to meet. Later, Grace and Darius meet and head to Cal’s. He doesn’t want to talk to them. On the way back to the car Grace talks about AJ and Noah. The last time she talked to Noah it was awful.

Mae and James show up at an old bar they are thinking about turning into a church. Mae is less hopeful. James thinks it is a possibility. Mae tells him they need to gut it all.

Charity is furious when she arrives to find her office being repainted. She learned it isn’t her office anymore. Judie has taken over. Meanwhile, Jacob and Kesiree meet with their lawyers. She wants custody of Jacob. Jr.

Noah tells Grace he is divorcing Isabelle while they sit and wait to see AJ at the hospital. He is staying with his mom. The doctor comes out to tell them AJ doesn’t want to see either of them. Grace cannot believe it.

Sophia arrives to see Zora. She wants to get a playlist they shared for AJ. She tells her how she and Dante are done after she lost her virginity. He went back to his ex.

Charity meets with Phil and Judee. She tells Judee that Phil’s father is making him marry her. Judee laughs it off. Charity congratulates him for marrying a good Christian woman.

While leaving the hospital, Noah tells Grace he is sticking around and wants to work on their family. She tells him she has been here for 3 years and still doesn’t feel like she is family. He tells her that it is on her.

Mae and Grace sit on the steps at home and talk about Faith being gone and AJ not seeing Grace. Mae comforts her. Charity arrives. Mae wants them to tell her what she can do. Grace walks off. Mae tells Charity that she and Grace both have problems far bigger than her.

At home, Kerissa threatens Jacob when he says he is going to tell Zora that he wasn’t the one who cheated this time. She holds the will over his head for leverage.

Charity finds Grace and gives her something. It is a poem she wrote when she had trouble with Nathan. Grace reads it. Charity tells her she lost a child two. Grace doesn’t know how she could even make it about her.

James tells Mae he called a contractor. He also tells her he wants to marry there. It seems James may be having memory issues. He forgot they planned to marry on Flag Day.

Mae breaks her fast while Sophia calls Dante. His ex answers. Meanwhile, while fishing Jacob finds Loretta’s will in a fishing box. Zora comes to see Sophia. A naked photo of her is circulating.

Cal calls Grace about a lending company. She doesn’t understand what that has to do with Bob. He cannot say more.

James listens to an old record on his record player. Grace arrives at the hospital to see AJ. Jacob shows up at Tash’s. He needs to find Basie. She tells him Basie is dead.