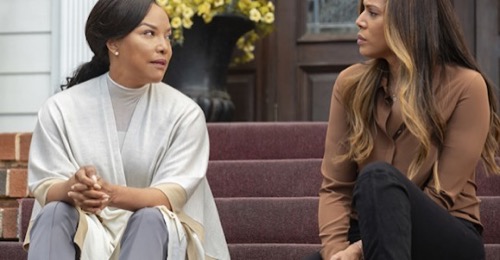 Tonight on the OWN their new series following the Greenleaf family called Greenleaf with an all-new Tuesday, July 7, 2020, season 5 episode 3 and we have your Greenleaf recap below. In tonight’s episode called, “The Third Day,”  season 5 episode 2 as per the OWN synopsis, “Grace is torn between pursuing Bob Whitmore’s past and her family.

Lady Mae and Bishop face challenges to their seedling dream of a new church; Jacob makes a discovery about the mansion’s history.”

Zora helps Sophia scan through social media to get rid of the photos that were leaked of her. Nikki shows up, taunting Sophia for her amateur photos. Sophia knows she was the one who leaked the photos. The two fight psychically. Zora is forced to intervene, telling Nikki to leave.

Noah arrives home with Grace. James and Mae are welcoming to him. They talk about AJ. Meanwhile, Charity wants to preach soon. Instead, she is asked to help Judee.

Mae tells Grace, Noah, and James they all need to be on the same team now for AJ. Grace doesn’t want to hear it and gets up to leave the room. James follows after her, telling her she shouldn’t get offended and what Mae is saying is true. After they talk Grace feels better.

Meanwhile, Jacob is looking into the death of Basie. He heads to a nearby ministry. He meets a woman who runs the church. He confesses to her that he thinks his dad killed her dad. She takes it well, telling him it is up to the Lord to punish those who have done wrong.

The woman asks Jacob what is going on when he starts to ask about Loretta. He tells her he can tell her more later. After he leaves, the woman calls someone to inform them Jacob paid her a visit.

At the office, Judee taunts Charity with her engagement ring. Charity isn’t phased. She plans to teach and preach right past her and Phil.

Sophia shows up at the hospital. Grace is surprised to see her. AJ wants to talk with Sophia. Grace isn’t mad, she tells her. AJ still won’t see Grace or Noah. He hugs Sophia and tells her he is planning on leaving soon. She asks him why he tried to kill himself.

Phil thanks Charity for helping Judee. He hopes one day they can talk like they used to. She tells him that most likely won’t happen.

Jacob drops Tasha off. He thanks her for the help in getting to speak with the woman. He shares that he is getting a divorce. She is surprised. They plan to get to know one another better when he is finally single.

Sophia continues to question AJ about why he wants to leave while Jacob tells Kerissa he wants joint custody.

Jacob visits James about Daryl James, the will, and whether or not he hurt anyone. James wants to know why all the questions. Mae visits Charity to tell her about their new church and offers her a position as an associate pastor. Charity shares that she needs to think about it.

AJ finally sees Grace. He tells her he was raped in prison. He has HIV and he doesn’t want to talk about it. She cries and says nothing.