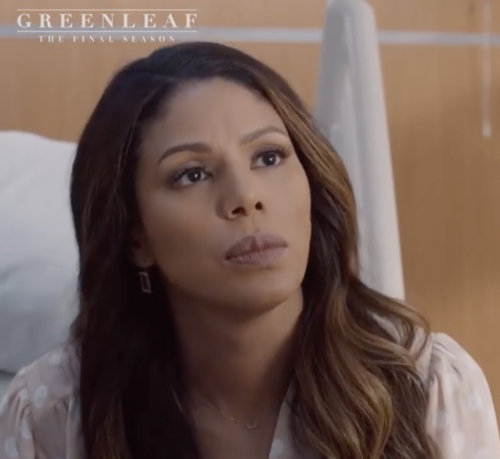 Tonight on the OWN their new series following the Greenleaf family called Greenleaf with an all-new Tuesday, July 14, 2020, season 5 episode 4 and we have your Greenleaf recap below. In tonight’s episode called, “The Fourth Day,”  season 5 episode 2 as per the OWN synopsis, “Grace discovers a key informant during her investigation into Edenvale Lending. Charity’s desire to honor the church’s past may threaten her future within it. Bishop decides to take the issue of the house into his own hands.”

After talking as a family, AJ tells Grace he wants to leave the hospital and go home with Noah. James is angry that Jacob could think he would kill. Mae is also angry that Kerissa thinks their house could be her house because of the will. Mae tells Jacob to get out. She is disgusted with this whole thing. After Jacob goes, Mae asks James about going to Cavalry. He forgot completely that they were talking about it.

At the church, Judee brings up how no-one wants to remember the past when she discusses plans for the closing of the church with Trinity. She reminds her of all of the scandals her family brought. Phil agrees with Judee’s plans for the last week of the church in the building. Grace shows up, watching their dispute. After she tells Trinity she has a plan.

Grace tells Trinity about Bob, the lending company, Marcus, and how Darius was fired for even trying to write a story. Trinity knows a few things about Marcus. She shares that he was a Black Panther now living under an alias.

Mae visits Kerissa and tells her to get out of the house. Kerissa tells her how she doesn’t want to divorce. Mae heads home and asks Jacob for a word alone.

Grace finds Marcus and calls him. She mentions the lending company, his wife, and Phil. He hangs up on her.

Mae reminds Jacob about how he too cheated. She made one mistake and now he is punishing her. She demands he forgive her and move on. He agrees to do it.

Trinity tries to talk to other heads of the church about a sermon she wants to give. They agree with Phil and Judee.

James pays a visit to Memphis Mission. He meets with the sister Tara. He wants to set things straight. Meanwhile, AJ arrives home with Noah to see Grace. He is there to grab his stuff. He doesn’t want to talk.

James tells the sister about her father and the church fire. He asks that they both get past this.

Judee comes in to see Trinity. She knows she tried to get her sermon approved. She fires her on the spot. Later, Phil tells Trinity Judee isn’t going to press it. Trinity, however, has had enough. She is leaving and plans to sue.

James talks with Grace who is upset about AJ. He tells her to let God do his work now. Jacob cannot seem to apologize to Kerissa.

Sophia and Zora have fun with AJ. Grace comes in. She doesn’t push, only tells him he can come back when he wants. He kisses her goodbye.

Phil tells Judee that Trinity made it sound like something was in the works when she said the church wouldn’t make it past Tuesday. Judee tries to seduce him. He tells her no. She is offended. She walks off mad.

James tells Mae about Tara. She can hardly believe it. He assures her this is all settled. Jacob arrives. He tells Mae he couldn’t do it. Trinity and Grace show up shortly after. She tells them all she quit. They all sit for dinner. The girls and Kerissa also come to dinner. Tara calls. She wants to talk about the house. He tells the family.