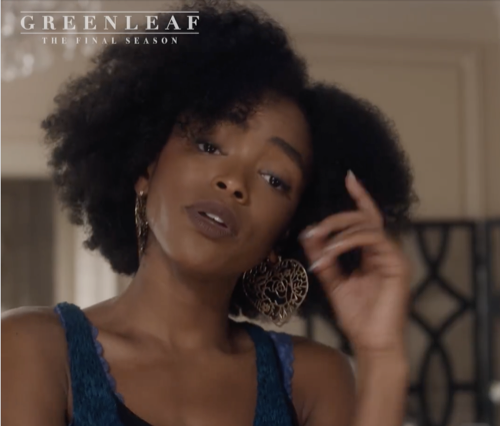 Grace fights to stop the demolition; Lady Mae tries to negotiate for the mansion, but a reveal about the original owner prompts Bishop to a revelation of his own.”

James and Mae talk in bed about what to do with the Tara situation. Mae wants to pay her some money. James doesn’t want to pay her anything. It is like admitting he did someone wrong.

Jacob and Zora talk. She is headed to New York and wants to know if he has talked to Mom. Kerissa was supposed to set up a place for her to stay. Jacob tells her she isn’t leaving today and she needs to cancel her flight.

AJ shows up to see James. He wants to work on the car. Meanwhile, Judee and Phil are outside the church which is going to be demolished. Aaron and Grace show up to tell them they need to stop. They have an order on the way to prove H&H conducts fraudulent business. A judge is looking at their claim as they speak. Just then, Noah comes to tell Grace he found the caretaker of the Greenleaf estate.

Mae and Tara sit and talk. They try to come up with an agreement. Mae can’t seem to make an offer that sits right with Tara. Meanwhile, Jacob calls Kerissa to ask her if she knew they sold the land to H&H. Kerissa admits she knew.

James and AJ sit and talk. James cannot wait until AJ is saved by God. The feeling is better than 10 sunsets and easier than building the car.

Grace and Noah meet with the caretaker. He tells them how Ms. Davis the prior owner of the estate always lets Darryl in. He was always showing up at all hours. After hesitating, the caretaker tells them that Darryl was her son. They are shocked.

Mae comes in to see James and Charity watching the news. Bob Whitmore is announcing his plans to run for the senate. Grace comes in to tell them what she has learned. James tells them to call Rochelle and Tara and have them come over. They say no but he asks them to trust him.

Zora tries to talk Sophia into coming to New York. Downstairs, Mae tells Rochelle and Tara what they have learned.

Mae tells them that they will hand over the house if the story is true. James is angry. Rochelle doesn’t want the house. She wants James to admit he killed her father. Jacob comes in. Everyone is headed to the church. Charity has sent out a mass email to the community about the fraudulent spending. She plans to tell all about Bob Whitmore has been up to.

At the church, Bob tries to do damage control in front of the church. Charity, Darius, and Grace dispute his lies, accusing him of targeting troubled black families. Phil gets up and backs Charity and the others. He tells the story of his mother. Phil asks for his ring back from Judee. Bob tells everyone he is honest and that he saved the church from the Greenleafs. James and the family arrive to defend themselves.

James tells the whole church his story of how he was given the house and used the collateral to build the church. He didn’t connect the fire, the house, and the church. He didn’t want to. He just wanted to keep succeeding. He lost his way and the community paid the price along with his family. Many stand to support him. Phil tells Bob and Judee to leave. They get up to go. The church sings together, hugging.

Grace finds Rochelle leaving. She thanks her for getting involved in her family business and with AJ. It was actually all a blessing.

Phil finds Charity in the church hall. He tells her he loves her. She tells him never again. She walks away proud and smiling.

Darius and Grace sit. She feels good. Bob is stepping down from H&H. They kiss. She heads to see Sophia. Sophia tells her it was stupid she sent photos to Dante and she will never do it again. Grace has no idea what she is talking about.

Mae comes in to see James. She wants to marry tomorrow, she tells him. James cannot talk. He is having a stroke. She calls 911. She gives him a pen and paper. He writes “I do” before slumping over. Mae cries hysterically, begging him to stay with her. He isn’t responding.