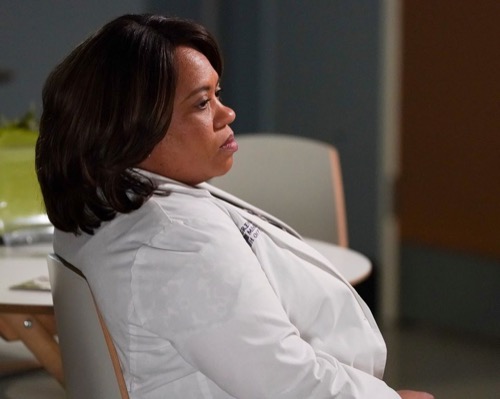 Jo and Link fight to save a young man who fell onto train tracks and Jackson and Vic’s relationship hits a snag.”

Alex Karev left Jo. She wasn’t taking it well. She fell apart when she saw his toothbrush and so she was staying with Link. She didn’t really want to be home by herself or see anything that belongs to Alex. She also needed a friend to talk to. She couldn’t really turn to Meredith because Meredith was Alex’s friend first and so having Link around was perfect. She knew she could tell him anything. She also knew her friend was just glad to have someone over. Link has been feeling some depression himself since he and Amelia took the DNA test and he never did get an answer-back. Amelia had wanted to know if he was with her for her or the baby and he accidentally let her know it was the baby.

Link didn’t want to be with Amelia if he wasn’t the father of her baby. He had heard about her tumultuous relationship with Owen and he didn’t want to put himself in the middle of that if he didn’t have to. Link was protecting himself. It is just unfortunate he was doing so at the cost of his relationship with Amelia and so Amelia didn’t want him. She was going to rely on her sisters. She’s been turning to Meredith and especially Maggie for support. Maggie incidentally betrayed her by accident when she revealed Amelia’s secret. Maggie let Teddy know that Amelia’s baby could be Owen’s and so Teddy freaked out.

Teddy slept with Koracick. She did it because she didn’t know how to feel about Amelia’s baby and she was intent on self-destructing. Teddy also did it because she suspects she and Owen were only together because of their own baby. He had been with Amelia first. He also left Amelia to be a family with Teddy and so now Teddy is scared. She thought she was going to lose Owen. She, therefore, decided to push him away before that could happen and so that’s where sleeping with Koracick came in. Teddy felt so guilty about it afterward that she told Maggie. Maggie didn’t want to hear the details because she thought it was gross and so Teddy couldn’t really speak about it.

She had no one to turn to. She began feeling guilty again and so she confessed to Owen. Teddy didn’t tell him about Koracick. She told Owen about Amelia’s baby and she asked him what it would mean for them. Teddy had been hoping he would still choose her, but he didn’t say anything. He went in shock and he didn’t reassure her. Teddy had wanted an answer from him. She eventually got it and it was the one that she always suspected. She suspected Owen would go back to Amelia. She confronted him about the baby because she needed the hear the truth one way or another and he confirmed her worst fears.

Owen still has feelings for Amelia. He tried to deny them in the beginning and it wasn’t working anymore. He still had feelings for her. He also had feelings for Teddy and so it was all rather confusing. Owen didn’t speak up fast enough. It hurt Teddy and she ended up storming off. The two of them weren’t talking and Amelia meanwhile was continuing to be a doctor. She treated a young man who he fell onto the tracks because he was too busy making out with his girlfriend. It was sweet and sappy at the same time. It also infuriated both Jo and Link who had seen the pair making out and had made fun of them for being so grossly in love.

They were so sick of the couple that Amelia had to stop them from talking to the girlfriend. Amelia was doing that while the rest of the hospital was turned inside out in order to cater to a billionaire. The billionaire’s name is Griffith Ford. He was a friend of Catherine’s. He got her to give him a whole floor of the hospital and there might not be anything wrong with him. Ford believes there’s something wrong with his brain. He wasn’t as quick as he normally was and so he suspected either cancer or a medical condition. He also wanted the doctors to test him for everything. He believes there’s something wrong with him and he wants the doctors to find it.

Koracick was put in charge. He tried to get Meredith to treat the billionaire and she refused. She didn’t want to treat someone who had a whole floor to himself while the ER was overcrowded. There were people waiting in the hallway because they couldn’t get a room. The fact this guy got a whole floor to himself was just one more thing wrong with the system and so Meredith didn’t want to be a part of it. She turned it over to Jackson. Jackson was having issues with his girlfriend. She was evicted from her apartment and so she tried to stay with him and that didn’t work out. She now is going to stay with her friend Miller and that seems to be a problem too.

Jackson didn’t want her living with a guy. Not even if this guy was a friend and he needed someone else to help raise a baby. Jackson thought this was going too far. He also mentioned she hadn’t even met his own kid and so Vic turned it around him. She said he was the one that didn’t want her to meet his baby. She also reminded him that she had needed a place to stay and staying with a friend was a great idea. The two of them were about this while Jackson found nothing wrong with Ford. Ford however still believes there’s something wrong with him. He kept pushing for more tests and so Koracick did his best to appease him.

Koracick tried to get Meredith back. She wasn’t feeling it. She just lost a patient because the patient was rationing her diabetes medication and so Meredith didn’t care to treat the man that had everything. She knew there was nothing wrong with him. Meredith left to Koracick and Koracick kept leaning on Jackson. The two men were pandering to a billionaire as the rest of the hospital was struggling to get by. Richard had handed over his service because his hands are shaky and he couldn’t trust them not to kill his patients. He also flipped out on Bailey. He was so angry about everything changing that he took it out and he later apologized for it.

Richard didn’t mean to hurt her. He was just feeling so bad for himself that he lost sight of where he was and who he was speaking to. But Link and Jo talked. Jo told him that he hadn’t been turned down. He had been given a choice and that’s more than she ever got with Alex. Jo doesn’t want to give up on love. She knows that one day she’s going to put herself back out there and so she didn’t want Link ruining his own chances at love. He and Amelia had had a good thing going for them for a while. He shouldn’t have been so quick to give that up.

Link went over to Amelia’s and he told her that he still loves her. He no longer cares who the baby belongs to. He fell in love with Amelia and he didn’t want to lose her. He was able to convince her that he wanted her no matter what and so she finally told him the results of the DNA test. Link was the father of her baby and now they get to be a family.

Jackson and Vic broke up. They were at different points in their lives and they couldn’t reconcile their differences.

Koracick meanwhile told the billionaire that there was something wrong him and so the guy wrote the hospital a large check. Koracick also talked to Teddy. Teddy went to his office to apologize and they ended up sleeping together again. Afterward, Teddy went home to Owen and he told her that he chooses her. He said he’ll always choose her and so she couldn’t tell him about what happened with Koracick. She didn’t want to break his heart.

And there was something wrong with DeLuca because he wasn’t acting like himself.