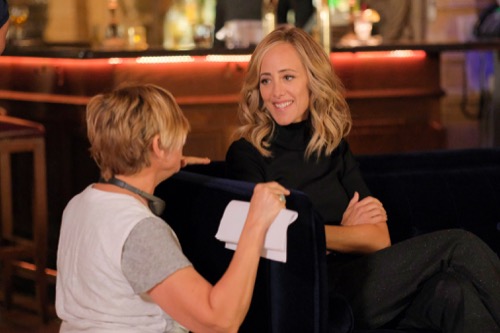 Maggie and Teddy run into people from their past at the same conference, while Hayes relives moments from when he met his late wife.”

Most of the doctors went on the road. They traveled to LA. They went for the LA Surgical Innovation Conference and some like Richard hoped to display his new PATH Pen. Richard was up in his room practicing for his moment in the sun when Catherine came knocking. Catherine missed him. He missed her. They soon fell back into being who they were with each other and they even laughed about her purchasing his hospital. Richard was mad at her in the beginning, but he’s since found the humor in it and the hospital was hemorrhaging money. Catherine’s decision to purchase it was being questioned by the board and so she and Richard laughed about it.

It was good to laugh. They haven’t done it with each other for so long that they were afraid they forgot what it was like and so her coming to the conference was the best decision for them. They were finally working on their marriage. His daughter Maggie meanwhile was hanging out at a heart valve conference with Teddy. Both women were glad to be away from the hospital. They were ready to party and they both saw the perfect guy for Maggie. His name was Dr. Winston Ndugu. He trained with Maggie and she hadn’t remembered his name until he came up behind her. Only he was handsome and she hasn’t been with anyone since Jackson.

Maggie jumped at the chance he offered. They had drinks, they made out, and they talked. He asked Maggie about herself. She told him her favorite foods. She even asked him some questions. She asked him who was his favorite person and he said his mom. He lost his mom two years ago to ovarian cancer. She lost her own mother to cancer and so they bonded over it. They were talking while Teddy was getting to know the new guy. Dr. Hayes was a mystery. He was Irish and everyone could tell because he sounded like it. They just didn’t know the backstory to him. Hayes was a widow. His wife’s sister lived in LA and so he brought his kids to the conference.

He stashed them away as he had drinks with Teddy. But the meeting at the hotel again had reminded him of meeting his wife. Abigail had been handing out pens and he took all of them just for the chance to speak to her alone. Hayes had spent several good years with his wife. They had two children and they were able to fight off the first time she had cancer. The second time, on the other hand, wasn’t as successful. Hayes lost his wife. He had to be there for their kids and so remembering wasn’t easy for him. It made him testy. Hayes lost his temper with a medical salesman and he was forced to make his apologies to Teddy for causing a scene.

Hayes hadn’t wanted to come to the conference. He was told to come by his superior and he knew he couldn’t back out of it. So, he came. He came and he hated remembering his pain. Hayes wasn’t the only one who was remembering. Teddy was doing so as well. She ran into an old friend. She Claire had once comforted each other as they watched the fallout of 9/11. They had been friends and they were living in New York at the time. 9/11 affected them differently because it was so nearby. The women had had a third friend who had been the glue to hold them together. This friend had meant a little more to Teddy than she ever admitted.

This friend’s name was Allison. She and Teddy were together. They were secretly dating and it had been so hard on Teddy when she lost her. Its why she named her daughter after her. Teddy thought naming her daughter that was a great tribute to the original Allison, but she’s also has never revealed to anyone that she was bisexual or that she was in a relationship with Allison because she was also seeing Claire. They had an affair behind Claire’s back. Claire didn’t find out about until after Allison died because she had gotten her hands on Allison’s phone records. She had wanted to know if she had tried to call someone as the towers went down and that’s when she found out Allison had tried calling Teddy. And not her.

Things changed after Allison died. Claire and Teddy drifted apart as friends and they never discussed the affair. They had let it lie until now. Claire walked off and Teddy relived some old memories she thought she put behind her. Teddy later went after Claire. She was going to give her the apology she owed her and she told Claire that Allison loved her as well. Teddy hadn’t understood at the time how one person could love two people. She understands now and she explained herself to Claire. They talked about Allison. They were also finally ready to put their pain behind them.

But Richard had unfortunately made everything up with Catherine. Catherine had never come to the hotel. She had never apologized and so Richard’s mind had just made all of it up. He wasn’t well. His hands were shaky. His memory was going and to make things worse Richard was doing his best to hide his symptoms from people who cared about him. From people like Maggie. Maggie was asked by her new love interest to come with him to Boston and she was seriously considering it. She told him she needed to create spreadsheets first. She was a planner and she needed to envision a future with him before she could take that step.

Maggie was seeing this future when Richard went up onstage and he lost it. He completely lost the plot.

Richard had to be rushed to the hospital and this time there was no hiding his condition.