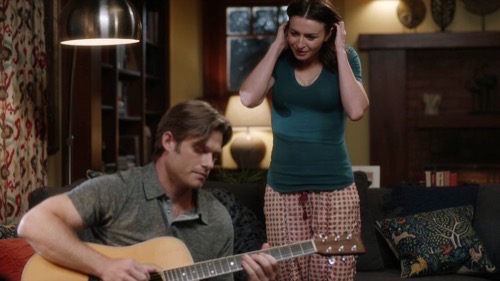 Grey Sloan Memorial Hospital is a designated Covid-19 center. This means that coronavirus cases were directed to this hospital and that this hospital treated an overwhelming number of people. There was the Covid-19 cases. There were also the occasional non-Covid cases and then there was Meredith. Meredith still hasn’t gotten better. She was exposed to the coronavirus because she was the doctor assigned to that ward and somehow she caught the disease. She caught in spite of all the precautions she took. She wore masks. She watched her hands regularly. She was even rocking a full-body suit on shift and so her getting sick took everyone by surprise. They all became worried that her condition would turn out like so many others who caught the coronavirus.

Meredith also wasn’t a great patient. She tried to refuse care at first. She thought she could sleep it off if she was just allowed to return to her hotel room and it wasn’t until she began seeing dead people that it dawned on her that might be closer to death than she thought. Meredith first saw Derek. He was the great love of her life and she still misses him. She next got a visit from George. George had been her fellow intern at the hospital. He was also a wonderful friend who died after he pushed a woman out of the way of a bus and he’s been dead for much longer than Derek. George was the first true loss Meredith experienced. He had been in love with her and, while they did sleep together, it hadn’t worked out because she had been in love with Derek.

It was good for her to see George again. She had missed him. She and George caught up on everything he missed. He told her that he sometimes checks in on her. He likes her kids. He understood why she didn’t want to leave them because he wouldn’t want to leave them either if he had been position to have kids and he hadn’t wanted to leave at all as things stand. George hadn’t had a choice in the matter. He died because it was his time and he told Meredith things were different for her. She was a force. Everyone said so and its true. Jackson and Jo had even joked about it. The two of them have been hanging out more ever since their failed attempt at hooking up and so they decided to just be friends.

Jo told Jackson all the times that Meredith would barge in on her and Alex. It said more about Meredith than it did about Alex and Jo can laugh about it now. She and Jackson were both worried for Meredith as well. They didn’t want her to die. They wanted her to get better and the more they talked about the past the more Jo felt at ease around Jackson. Jo later made a move on him. Jackson hadn’t pushed her away and so they fell into bed and this time it wasn’t a failure. The two of them were dealing with this crazy time by acting even crazier. Not that they minded because it helped take their minds off the problem and the problem was the hospital. It was hard going to work everyday there.

The hospital was a harsh place. Koracick thought he would miss it and he doesn’t. He caught the coronavirus as well. He was well enough to return home and there he found out about all the computer games he could play. Koracick had fun while he waited to test negative. He even bonded some with Hellmouth. She was the one in charge of collecting his text samples and bringing them back to the hospital. She also saw his computer while she was at his house. She saw that his computer looked like he was hatching an evil plot and at first he said he was saving the world from the coronavirus, but then a zombie popped onscreen and she knew then that he had been playing a video game.

The game was “Zombie Apocolapyse”. Hellmouth was stuck on Level 8 and, by time she returned to Koracick’s home, she told him she had finally reached Level 9. Only Koraick was no longer playing the game. He blew up the whole world in order to wipe out the disease and he told Hellmouth that eventually people will make those same decisions about their current world. Koracick was in a dark place. Hellmouth realized that and initially she thought she should turn to Teddy for help. She even approached Teddy before she remembered how badly the relationship ended. Teddy and Koracick weren’t together anymore. They were together once and it was good and then she left him for Owen. Then she cheated on Owen with him. Teddy just didn’t know what she wanted and she made everyone else miserable while she figured it out.

Luckily, Teddy was a better doctor than girlfriend. She and DeLuca found out about a clinical trial by Dr. Kuo in New York and they both wanted several of their patients to join this trial. They’ve heard good things about it. They also brought it to Richard’s attention and he told them he had to think about it. Richard didn’t say “yes”. He didn’t bother to pretend he was happy that such an opening had been cleared for them or what it could mean for Meredith. He turned it down because he was too frightened to take the risk. Meredith had fallen into a deep sleep that she hadn’t woken up from and she was still talking to George when she overheard Richard talking about the clinical trial. She heard how hard it was for Richard to come to a decision.

Richard was too afraid to say “yes”. He was also afraid he was making a mistake by saying “no” and so it wasn’t until Richard saw Meredith shaking in her sleep that he ultimately agreed to put her in the clinical trial. She’ll receive an experimental drug. This drug could either kill her or help and everyone was praying it would help her. Both Maggie and Amelia were worried. They couldn’t be with Meredith at the hospital because they could risk bringing the disease back home to a house full of kids. Amelia was home all day with them. Maggie was still working at the hospital albeit not in the Covid unit and she was also going on virtual dates with her new boyfriend Winston. Winston invited her to the virtual party they were having for his grandma and she took that as a great sign.

Then the party happened. Everything was going great until his father joined the chat room and things were so bad between Winston and his father that Winston left the chat room early. He didn’t tell Maggie he was going to leave. He just left and she ended up making small talk with his family. Maggie couldn’t even get into contact with Winston afterwards. He ghosted her and she laughed about it with Amelia. Maggie said she wasn’t taking it seriously because they were a pandemic going on. Maggie also remembered that she ghosted him for a month and so turnabout is fair play. Winston called her later. He apologized for ghosting her and she told him it was okay. The two quickly fell back into their cute relationship.

Winston took Maggie’s mind off of Meredith. Meredith meanwhile was enjoying the time she had with George.