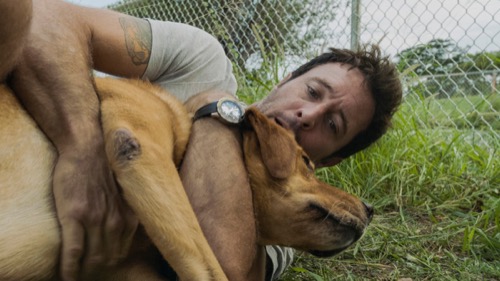 Tonight on CBS Hawaii Five-0 air with an all-new Friday, January 31, 2019, episode and we have your Hawaii Five-0 recap below.  On tonight’s Hawaii Five-0 season 10 episode 14 called, “”I ho’olulu, ho’ohulei ‘ia e ka makani (There was a lull, and then the wind began to blow about)” as per the CBS synopsis, “Soon after Danny meets the girl of his dreams, they get into a potentially fatal car accident in an area far from help. Also, McGarrett enlists Quinn and Tani to help when Eddie the dog suddenly shows signs of PTSD.”

The lovable dog Eddie wasn’t acting like himself. He took off and ran into oncoming traffic. McGarrett was concerned about him. He thought his dog might be coming down with something and so he reached out to his best friend, Danny. Danny has noticed Eddie’s behavior as well. He was just as concerned and he would have liked to have given McGarrett his full attention, but he had met a woman at a bar. They didn’t exchange names or anything like that. They simply met and got to talking. They even came up with a rule for their conversation. They would only talk about interesting things and so they had a bunch of fun with that for a while.

The two also hooked up in the bar’s bathroom. They liked each other and they liked sex. Things could have ended there, but she needed a ride and so Danny offered to drive her. He was driving her to the house she was staying in while she was on the island when they noticed the car. This car was swerving over into their lane. They thought this car would eventually notice them and it didn’t until it was too late. The other car forced Danny off the road. He and his passenger drove straight into a ditch and they were both battered pretty badly.

They tried using their phones. They didn’t have service down in the ditch and so Danny had to painfully climb out of the car. He needed to get back to the road to regain service as well as call for help. Danny was bound to call McGarrett and McGarrett was still worried about his dog. He even called the vet out to his home. He had gone on a date with this same vet and the date didn’t go anywhere. They never had a follow-up. They both moved on from that failed date and she was now with someone else.

The vet also had no problem with helping Eddie. She came out and she saw him. She ran several tests before she came to her conclusion. The vet believed Eddie was dealing with PTSD. He was with the Marines and the DEA for years. Eddie maybe a dog, but he’s seen a lot and some of it was affecting him. The vet recommended that McGarrett take his dog to an expectation and he did just that. He found an expert that was willing to check out Eddie. This expert confirmed the PTSD diagnosis and he suggested that McGarrett go through all the events that Eddie experienced.

McGarrett enlisted his team in helping to track down Eddie’s past. They searched for Eddie’s first handler who it seems died in Afghanistan and everyone was chipping in to help this one dog. They were all so focused on Eddie. None of them considered reaching out to Danny because he was taking time off of work and so Danny was let in a compromised position. His new friend was badly injured in the crash. She was stabbed in the back when something came through her seat and her legs were in a bad way because she was pinned.

Danny did his best to treat her injuries. He found something for the wound in her back and most importantly he kept her talking. Danny couldn’t let her go asleep. She might have had a concussion for all he knew and so Danny kept her talking. He told her about the things they have in common. He mentioned that they both went to the same restaurant as kids and, while it was boring, it worked. She kept talking. She wasn’t slurring her words and she kept in communication as Danny dressed her wounds.

She also asked Danny why he was in that bar. Danny told her story about how he was in that bar because of his ex-wife and he said that he and he gave a shorter version of the tale. He explained they recently tried to reconcile. It didn’t work and they both realized they were better off as friends. Danny then heard a car on the road. He left his passenger to go try flagging the car down and unfortunately he missed the car. They didn’t see him or hear him. Danny then returned to his own car and he saw Leslie was sort of out of it.

She was wavering between being awake and falling asleep. She also wasn’t applying the proper pressure to her back and so she was losing a lot of blood. Danny had tried to be there for her. He kept talking to her and he could see that it was no longer working. Leslie was dying. She was dying right in front of him and he thought there was nothing he do to stop, but then he heard the truck. A truck was coming down the road and Danny was able to flag it down. He stopped the truck. He told the driver he needed his radio and then he called their accident in.

Danny got help for him and Leslie. Only it came too late and so she died on his watch while McGarrett solved the mystery of his dog. Eddie’s PTSD came back because the neighbors recently planted some flowers from Afghanistan in her garden. The flowers reminded Eddie from when he lost his first handler. Now that McGarrett knows, he’s going to keep a careful eye on his dog and it turns out that’s not the only he’ll be keeping an eye on. He’s watching Adam. Adam returned and he claimed he had needed to clear his head. And so McGarrett pretended to be understanding even as he knows not to trust Adam again.